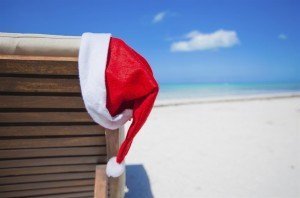 Around Christmas, the average high in Rehoboth Beach is 47 degrees, and the average low is 32 degrees. Rehoboth is a great vacation spot in the summer, but there are plenty of fun things to keep you entertained here over the holidays. Free of charge (donations accepted), you can visit Santa’s House on the Boardwalk, and have your photo taken with Santa (bring your camera!), or you can attend a presentation of “An American Christmas Carol,” produced by the Clear Space Theatre from November 29 to December 22. Afterwards, you might join the cast at Fezziwig’s barn dance. With the new sets, you will be convinced that you have been transported to the south! Also, don’t forget to attend the tree lighting at the Rehoboth Beach bandstand. Call 302-227-2270 for details.

December average winter highs for Williamsburg linger in the upper 40s to lower 50s, and the lows average from 30 to 34 degrees. Still, Colonial Williamsburg hosts a number of festive events to warm your holiday, and you will not leave disappointed. You may begin with the Grand Illumination on December 8, a celebration with bonfires and fireworks to accompany the lighting of candles in the windows of private homes and public buildings. This tradition began in the 18th century to mark a special occasion, and it lives on in Colonial Williamsburg. At the Williamsburg Lodge, you will enjoy your stay with music, entertainment, dining, and downhome holiday cheer. Then, you can stroll along the streets of Williamsburg, where you will be transported to Colonial America and greeted by warm homes, taverns, and government buildings, all superbly decorated to reflect holiday traditions of centuries past!

If you want mild weather and coastal southern charm to ring in your holiday, Wilmington fills the bill. Average Christmas temperatures entail highs in the upper 50s and lows in the upper 30s. Snowfall is rare, and even when it does occur, it soon disappears. Aside from the hospitable weather, there are lots of things to see and do for the holidays. Downtown Wilmington stretches out along the Cape Fear River, historically known for cotton export. Pop into the Cotton Exchange for Christmas shopping and dinner afterward. If you come early in the month, be sure to take in the Candlelight Tour on December 7 or 8, and then enjoy the Annual Wilmington Holiday Parade, which includes marching bands, entertainment, floats, and, of course, Santa. The Holiday Lights Trolley Tour will take you through the most beautifully decorated neighborhoods of downtown Wilmington, and takes place between December 12 and 22, so be sure not to miss it while you’re here!

Charleston, South Carolina experiences an average high of 58 degrees on Christmas Day, and a low of 44 degrees. For holiday entertainment in Charleston, you will enjoy the Annual Christmas Parade on December 1st and the Holiday Train ride afterwards. On the 2nd, you may attend the Annual Progressive Dinner, a celebratory tradition in Charleston, and then participate in the Teddy Bear Tea party at the Thoroughbred Club. Charleston hosts so many events throughout the months of December and January that it is impossible to list them all here, but you can be certain that the holidays in this charming southern city will never leave you disappointed. From Charleston’s rich history to its warm weather and friendly people, the holidays spent here will have you coming back time and again to relive the experience! 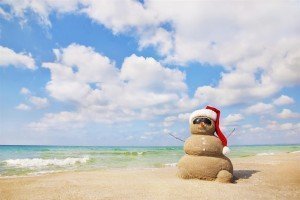 Average Christmas temperatures in Savannah peak at 61 degrees, with a low of 39, but the warm weather is not the only enticement Savannah has to offer for the holidays. One need only to view the events-calendar for Savannah in December to know that so many activities are scheduled it would be impossible to participate in all of them! A 2-hour performance of “A Christmas Tradition” is presented nightly from December 1st through the 26th, as well as many other productions throughout the month. Some of the festivities include holiday tours of Savannah’s historic district, canon firings, and a Christmas Eve and New Year’s Eve dinner cruise. Rest assured you will never be in want of something to do over the holidays in Savannah!

Not surprisingly, Orlando experiences some of the warmest December temperatures of all of the cities included in this article, with average highs in the low 70s, and lows in the low 50s. So, if your holiday plans include a trip to the tanning bed, you might want to visit Orlando instead. Moreover, Orlando hosts more than 100 holiday events in December, so your schedule is bound to be accommodated. Some of the events include an admission charge, but many are free to the public and are family friendly. From the Festival of Trees housed in the Museum of Art, to the Best of Florida Christmas, a 4.5 acre atrium that is transformed into a glittering holiday wonderland, not to mention her many theme parks, restaurants, pageants, and parades, Orlando is certain to please all who visit!

As agreeable as the weather is in Orlando, Naples is even warmer, with average December temperatures in the high 70s, and lows in the mid-50s. This year, Naples will host its 39th Annual Christmas Walk & Tree Lighting Ceremony on December 5, following a Chez Boet Wine Tasting Event from 5:30 p.m. to 7. On the 6th, the Celebration of Lights and Parade will be held at Ave Maria, LaPiazza, with a Marco Island Christmas Island Boat Parade on December 7th. The Christmas Around the World Parade and Gala takes place on the 14th, as well as Sounds from the Park, an outdoor concert series. Naples alone is enough to warm the travel-weary bones of visitors from the coldest inhabited regions of the planet, but when you add the southern charm and hospitable demeanor of this coastal town, you have a holiday winner!

For those of you who prefer traditional holiday weather, complete with wind-chill, ice, and snow, New York City is certain to please. With December highs averaging in the low 40s, and lows dipping into the low 30s, New York is a snowbird’s dream! And, with it being one of the most cosmopolitan cities to grace the globe, there is never a shortage of things to do here, with the holidays presenting no exception. From Radio City’s Christmas Spectacular, featuring the world-famous Rockettes, to New Year’s Eve at Times Square, there is much to do in between. Shopping in New York is always a pleasure, and especially so in December, when you can view the festive window displays that actually “pop up” along Fifth Avenue. And Macy’s hosts its annual holiday parade, made famous in the film “Miracle on 34th Street.” Whether watching ice-skaters in Central Park on a cold winter’s night, or listening to Christmas carolers along Broadway, New York City will provide a holiday experience that you will never forget!