What’s Out There: Winter 2016 Edition 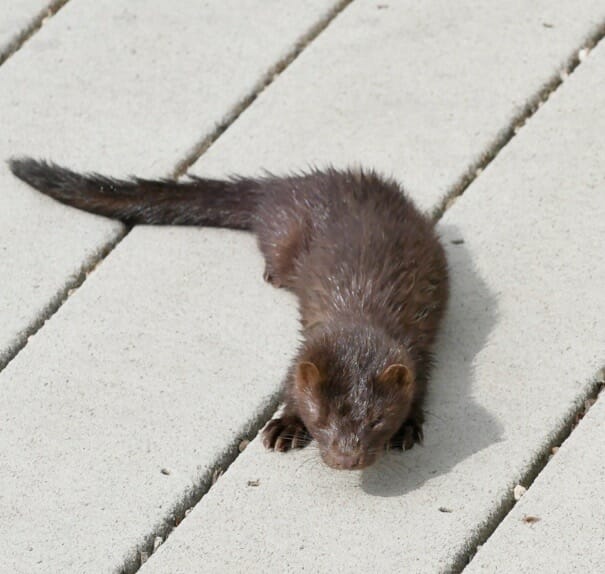 Last fall, the weather was unusually warm, delightfully sunny, and perfect for getting out and about in Eastman. Here’s a glimpse at what some of your neighbors saw this fall:

While kayaking along the northwest shore of the lake at the end of August, Elaine Lascher spotted a mink traveling along the bank.

Elaine also reported that there have been numerous sightings by members of the Weed Watchers group of rare aquatic creatures called Bryozoans. These invertebrates colonize in gelatinous blobs resembling a human brain on branches or sticks in the water and have been seen near inlets at South Cove, North Cove, and West Shore.

Robert Braitman saw a coyote on Mill Pond on September 6.

Tristan Gilson spotted a blue heron at South Cove over Labor Day weekend, and during the summer, a 40-pound snapping turtle in North Cove.

On September 21, Maynard Wheeler came across a mink relaxing in the sun on the South Cove deck.

Cyndy Adamic and her 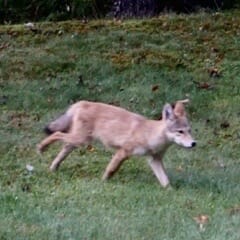 family had many “wild” visitors this fall. In August, they had a visit from a bear that walked past the deck, poked its head into the ferns and other plants to see what was around, and then moseyed off. In September, they spotted a fawn just twenty feet away from where they were sitting on their deck. Then, much to their delight, a second fawn appeared, followed by the mama deer. And finally, in late September, a fisher cat climbing up and eating crab apples from a tree in their yard startled the Adamics.

Carole White shared this beautiful story: “On Columbus Day weekend, my daughter, son-in-law and two grand girls aged 11 and 4 went to South Cove to look at the foliage shining on the lake. Another family with two young children joined us when their little boy said something was moving in the sand! We were fortunate to watch baby snapping turtles climb out of their nest and walk right into the lake! What an experience! …(Two) in the hole fought for a long time. Then the stronger just climbed over the other and came out followed by four more!”

Peggy McCauley reported that on November 3, a good-sized bear wandered across Highwood Way and through her yard. Her two dogs, safely inside, watched every step that bear made.

From our house on Hummingbird Hill, we saw the regular assortment of birds and little critters, gray and red foxes came through the yard pretty regularly, and we even spotted an occasional deer. The most memorable spotting of the fall wasn’t necessarily a welcome one—on two separate occasions, we had a black bear climb up the latticework and jump onto our second-story porch. The first bear was average size, likely a yearling; the second was larger than any bear I have ever seen. Both were looking for leftover birdseed. I confess that even though I knew better, I had been feeding the birds. It started out with the best of intentions. Our family loves watching the backyard birds, and of course, I told myself I would take the feeders in at night, but I got complacent and left them out. Well, let me tell you, there is nothing like a large black bear staring at you and your young kids from three feet away (on the other side of a glass door) to teach you not to mess with nature. We’ll have to make an effort to get out on the trails for bird watching this winter because we won’t be putting feeders out again anytime soon!

On a less dramatic note, we saw a beautiful blue heron while hiking at John’s Glen in late October, and, of course, the annual stopover for the Canadian geese on the polishing ponds, which somehow manages to be beautiful and absolutely disgusting all at the same time. (For those of you who haven’t seen it, the geese are beautiful, but the mess they leave behind is disgusting). Finally, I spotted my first fisher cat in October, crossing the road by the South Cove boat launch.

While you are out enjoying all that Eastman has to offer in the wintertime, don’t forget to email whatsoutthere@eastmannh.org if you come across any Eastman wildlife.