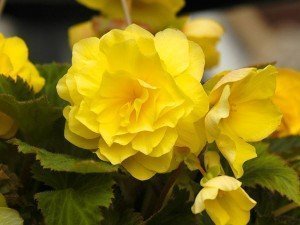 If you are looking for a colorful, attractive flower to grace your garden or provide colorful containers, try the tuberous begonia. It is easy to grow, blooms well in the shade, needs moderate care, and will reward you with a lovely display of blooms all summer long.

Tuberous begonias come in shades of white, pink, red, yellow, orange, and salmon, as well as bi-colors. If they have a darker edge to the petals they are called “picotee.” Double flowers are male, and single flowers female. The large flowers are usually double and may be six inches or more in diameter. Plants generally grow 12 to 18 inches tall.

Depending on the cultivar (cultivated variety), plants may have camellia, ruffled, or rosebud type flowers. The hanging basket types such as the Illumination series have smaller, more numerous flowers than the more erect types.

“Nonstop begonias”, which were first developed in Germany, are perhaps the most popular upright series, with double blooms in many colors. They are so named because if given some light during the night during winter months (indoors or in a greenhouse, of course), they will bloom nonstop. Other upright ones include the Panorama series with smaller but more flowers, and the Ornament series with burgundy leaves and red or pink flowers.

Many people don’t realize that begonia flowers can be eaten! The lemony sour flavor goes well with fruit salad, salads, yogurt, or ice cream. Just make sure if you are going to eat flowers, you don’t use any pesticides on the plant.

Tuberous begonias grow best in a location that has partial to full shade, but bright light.  They don’t like dense shade.   An ideal site might have morning sun, or sunlight filtered during the day by trees.  They prefer a light, rich, well-drained soil.  Prepare the site by incorporating organic matter, such as peat moss or compost, into the upper 8 to 10 inches of the soil.

If starting them yourself, purchase only high quality, firm tubers. Unlike other begonias, these grow from this bulb-like structure.  Tubers can be started early indoors four to eight weeks before the frost-free date for your area.  Plants usually flower about three months after planting tubers.

Use flats or pots filled with equal parts of moist peat moss and perlite, or three parts soilless potting mix with one part builder’s sand . The depressed or hollowed (concave) side of the tuber should be facing up. The tubers should be sprouted in the dark at about 70 degrees (F). If the air is cooler, you can place pots on a heating mat.

As soon as shoots develop, cover the tubers with more potting mix, and move to a bright location such as a sunny window. The young plants should not be transplanted outdoors until all danger of frost has passed.  If started indoors, gradually acclimate them over a few days to temperatures and the brighter light of outdoors.

When planting outdoors, place them at the same depth as they are growing in pots.  Tubers rot easily when planted too deep.  A minimum of 8- to 12-inch spacing apart is recommended to allow the plants to fill out properly. After planting, do not cultivate around the root system or the fibrous roots will be damaged. Since the stems are quite brittle, they often need staking, especially in windy areas.

Plants should be watered when the soil begins to dry. The tubers will rot if they are overwatered and soil remains soggy, or stems may snap off at the base. Try to water in the morning if possible so that any moisture that gets on the foliage will have time to dry before evening. Wet foliage increases the chance of disease.

Feed every two weeks with a general purpose liquid fertilizer, or according to label directions. Use half strength when the plants are young and just sprouting. You may also use a slow or controlled-release fertilizer in the final beds or pots.

They also make excellent patio plants in containers. Start tubers in 4- to 6-inch wide pots, or if buying such, transplant when well-rooted into 7- to 10-inch pots.  You may even put two or more plants in larger pots, window boxes, or long planters.

Pick flowers off as the edges turn brown to prevent them from rotting and starting disease. If plants are dry and stressed, and the leaves turn brown, the cause may be too much sun, too much heat, or too little water. If upright plants are leggy, this means that they are getting too little light.  Too little light for hanging basket cultivars will make them grow upright and not cascade over the container sides.

Yellowish leaves indicate more fertilizer may be needed. White growth on leaves is powdery mildew disease. Fungicides can be used, but wider spacing and more air circulation may be all that is needed.

If you’ve brought plants indoors before frost, force them into dormancy by gradually watering less often.  Remove the stems and leaves once brown and dry.  If left outdoors, after the first fall frost, dig the tubers and remove the foliage. Dry the tubers for a few days, and store them overwinter by placing them in dry peat moss or sawdust in a paper bag at about 50 degrees. Give them some water in late March or early April, bring into bright light when growth resumes, and start the process again.

4/1/14
Distribution of this release is made possible by University of Vermont Extension and New England Grows–a conference providing education for industry professionals and support for Extension’s outreach efforts in horticulture.

Search for Community Garden By State: