The paper is thick, and brown with age. It has been rolled and hidden for safekeeping for so long that when uncurled, it needs the weight of something heavy to keep it flat. The edges are torn and jagged. The only markings on the paper are long lines, all leading to a particular destination. The ink they are drawn with is faded in some places, but you can still make out the routes. Tracing your finger along one of the curved lines, it stops on the first of many X’s. 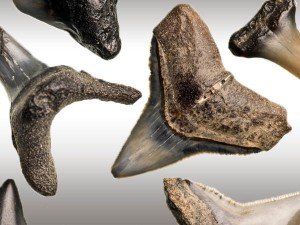 Treasure usually means gold or rare jewels. But on the coast, the ocean churns up other kinds of treasure. Only a couple of weekends ago over the Memorial Day weekend, one lucky beachcomber stumbled upon something great. On a stroll down North Carolina’s Kure Beach, she came across a shark’s tooth in the sand. It was not just any shark tooth, though. This tooth came from the mouth of a Megalodon, a prehistoric shark that roamed the waters millions of years ago.

Not too far from Kure Beach, a little ways off the coast of South Carolina, is the home to another amazing find. If the discovery of steamship wreckage many years ago was not remarkable enough, the wreckage could now hold hidden riches for a South Carolina treasure hunter.

The excitement and possibility of finding treasure builds, and you eagerly find yourself coming to another X on the map.

Blackbeard. His story drenches the Southern coastline, leaving haunting chills down your back. Just from his appearance everyone knew that Blackbeard was not someone to mess with: the slow-burning fuses tied in his beard and hair, smoke billowing around a figure dressed entirely in black. A large black captain’s hat to complete the look. Queen Anne’s Revenge, equipped with forty guns. He was terrifying, and his legend rests on the shores. In 1997, the wreckage of the Queen Anne’s Revenge was uncovered a little ways off the coast of Beaufort, North Carolina. It is the second oldest shipwreck discovery made in North Carolina, and is considered a national treasure. Artifacts from the ship are on display in the maritime museum in Beaufort for anyone who wishes to get a closer look into the lives of the pirates aboard the Queen Anne’s Revenge.

You run your hand over the map, smoothing out some of the wrinkles, and your eyes land on 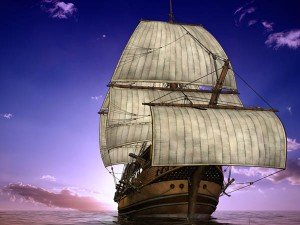 a piece of map that is littered with X’s. It does not take long for you to want to uncover this mystery.

The Atlantic Ocean has a haunting history, too. The waters around Cape Hatteras have earned the nickname Graveyard of the Atlantic, it being the final resting place to at least 600 ships. The cold waters of the Labrador Current meeting with the warm waters of the Gulf Stream, and the shifting sandbars (Diamond Shoals), have been known to create a trap for mariners for centuries, taking ships as the prisoners. Most curious is the mystery of the giant schooner Carroll A. Deering, the “Ghost Ship of the Diamond Shoals.” The ship was found aground in January 1921, crew missing, the ship seeming to have been abandoned. Why the ship ran aground, and where the crew disappeared to, is a mystery waiting to be solved. The replica of the 1700’s tall ship the Bounty, built for the Marlon Brando movie Mutiny on the Bounty, also came to rest on the bottom of the Atlantic in 2012 after a long battle with Hurricane Sandy.

Just before you fold up the treasure map, there is one last thing that catches your attention. There is no mystery attached to it, but it can definitely be considered a gem.

X marks the spot on The Intracoastal Waterway, an important part of the Southern Coast. Being 3,000 miles long and running from Boston to Key West, the waterway provides sheltered passage for commercial and leisure boats. During World War II, the waterway was used as a route to avoid submarine infested waters along the coast. Today, the Southern part of the Intracoastal Waterway is mostly used for recreational boaters. 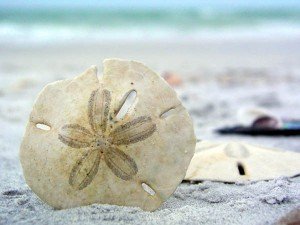 Carefully you roll the map up and put it back into hiding. The discoveries are only a few of the many X’s still out there, waiting to be found. For right now, though, these special treasures are enough to keep you occupied. Pondering the mystery of the Carroll A. Deering, scouring the beach for teeth and sand dollars, relaxing on a boat in the waters of the Intracoastal Waterway… Wondering when to begin the next treasure hunt.

Search for Coast By State: