By Jan Cullinane. Previously published in the 2015 Fall Issue. 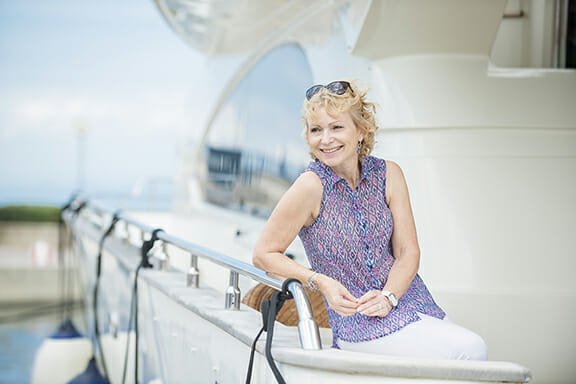 Solo travelers make up more than 11 percent of leisure travelers in the United States, according to the U.S. Travel Association, and this number will continue to increase. After all, in 2014, the number of single American adults outnumbered those who are married. Travel tops many retirement to-do lists, and research repeatedly shows that experiences, such as travel, generate more joy than material purchases.

As a wise person said, “Travel is the only thing you buy that makes you richer.”

But, there can be a big financial catch to solo travel: the dreaded single supplement, which is a surcharge of 10 to 100 percent of double-occupancy rates for cruise staterooms and organized tours. Let’s explore a few specific ways to cruise or join an organized tour and get around this single surcharge:

• Anchors Away. Cruise ship companies are realizing that solo travel is popular, and not everyone sails as a couple. Some ships include staterooms designed specifically for singles: Norwegian Cruise Line’s Epic, Breakaway, Getaway, Escape and Pride of America boast studios designed and priced for singles, and as an added benefit, have their own Studio Lounge for single travelers. P&O Cruises is a British line offering single cabins on six of their ships: Arcadia, Azura, Aurora, Britannia, Oriana and the Ventura. Royal Caribbean’s newest ships, Anthem of the Seas, Quantum of the Seas and Ovation of the Seas have single staterooms. Sometimes, cruise lines waive single supplements for specific cruises; for example, a 13-day river cruise on Uniworld from St. Petersburg to Moscow in late spring of 2016. Other lines reduce or eliminate their single supplement if it’s low or “shoulder” season, if it’s a re-positioning cruise, or if they are having trouble filling a ship (after all, it’s better to have someone occupying a cabin and paying tips, buying drinks and purchasing excursions than having an empty stateroom).

Cruising is attractive for solo travelers who want an opportunity to socialize: you can be seated at a dining table with other passengers; there are organized excursions; many cruise lines offer “meet and greets” for singles, and schedule activities such as bridge, computer seminars, exercise classes and trivia contests (I’m addicted to these) that provide ample opportunity for interaction. There are hosted cruises designed for singles (go to vacationstogo.com for a good list; some trips are specifically for the over-40 crowd), and their site offers an optional “Match Program” to pair you with a same-sex single in a stateroom to avoid the single supplement. VacationstoGo also lists discounted single supplements on many cruises.

A company that specializes in singles’ cruises is Singlescruise.com. The majority of its cruisers are 35 – 55 years old. Singlescruise.com will match you with a same-sex roommate if you wish to cut costs by sharing a room. There’s usually a 50/50 split between men and women, with about 100 singles per cruise (not everyone on the ship is single).

• Go with a Group. Looking for a group, but traveling by yourself? No worries. There are companies that court these adventurers, although it’s hard to find companies without some kind of single supplement. One that does offer single-supplement-free travel on all of their trips and pre/post trip excursions is Overseas Adventure Travel (OAT), oattravel.com). About 35 percent of OAT tours are booked by solo travelers. On a personal note, I recently returned from a fantastic OAT trip to Israel, a total of 14 people (OAT is committed to smaller groups, never more than 16), comprised of three couples and eight solo travelers. It was the 13th OAT trip for one single woman on the trip!

Abercrombie & Kent (A&K abercrombiekent.com) has reduced single supplements, depending on the trip. For example, there is about a $500 upcharge (rather than paying double as on some trips) for a single traveler on some of their river cruises.  A&K does have an “insider special” without a single supplement on the “Family Galapagos” or “Wonders of the Galapagos” tour. But, there is only one smaller cabin available for a single, so book early.

A number of tour companies cater to single travel, and will offer a “match” service to find you a roommate (no guarantees of compatibility, though!). Singles Travel International (singlestravelintl.com) offers cruises, tours and weekend trips to solo travelers generally between 32 – 65 years old. If you’re a solo female traveler, there are more tour companies specifically for women than men: Adventure Women (adventurewomen.com) and (gutsywomentravel.com) are two good examples.

With the rising numbers of solo travelers, there will be an increasing demand by those who “roam alone” but want some structure, and freedom from what seems more like a singles’ penalty than a singles’ supplement. Look for the number of companies catering to this demographic to increase, and remember, it never hurts to ask them to waive the single supplement.

Jan Cullinane is an award-winning author, speaker, and consultant. Her current book is The Single Woman’s Guide to Retirement (AARP/Wiley).