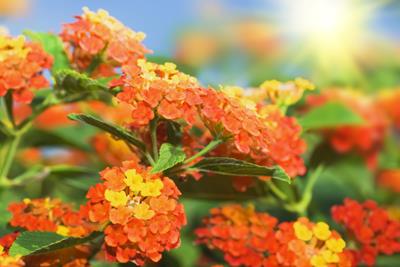 A picture perfect garden doesn’t have to take a lot of time or effort. The secret lies in choosing plants that thrive on neglect. Plant them in the spring, and they’ll survive hot summers with little or no care. Succulents, such as agaves and aloes, are among the most drought and heat tolerant plants according to Lisa Barrus of Herb Creek Landscape Supplies in Sandfly, GA. “You can go on vacation for two months,” says Barrus, “and they’ll look exactly the same when you get back.”

Succulents aren’t the only low-maintenance options, though. You’ll find plenty of other drought tolerant selections at a local nursery. Here’s a few to get you started:

Trailing Lantana (Lantana montevidensis)
Need a drought-tolerant, heat-loving plant for containers? Trailing lantana is the ticket. The scalloped, green foliage and lavender or white blooms spill over the sides of hanging baskets and pots, creating a charming effect that lasts from spring until late fall. Trailing lantana prefers sun to partial shade, and tolerates salt spray. It grows one to two feet high and spreads up to three feet. Annual, although it may be hardy in some areas.

Yarrow (Achillea millefolium)
This plant grows wild in many parts of the U.S. and makes a fine addition to an informal flower bed. Clusters of yellow, pink or white flowers sit atop long stems. Yarrow grows best in full sun and blooms from spring through fall. Leave the dried flower heads to add interest to the winter garden. Yarrow grows one to two feet high, depending on the variety. Perennial.

Michalmas Daisy (Aster sp)
For fall color, plant these charming asters in containers or in a casual garden bed. The plants grow two feet high and produce large lavender flowers with little care from you. Plant Michalmas daisies in full sun to partial shade, and shear them back during the summer to
encourage compact growth and more fall blooms. Perennial.

Tips from the Experts
• Even heat- and drought-tolerant plants need some extra attention immediately after planting. Water newly planted perennials at least two to three times per week for the first month. Once the plants start producing new growth, they become more drought-tolerant.

• Use a moisture-conserving potting mix that contains perlite or vermiculite in pots and hanging baskets, which tend to dry out faster than plants growing in the garden.

One thought on “The Occasional Gardener: Heat and Drought Tolerant Plants”