Roses in northern New England face many challenges, including long, cold winters that often kill hybrid roses. Old-fashioned or heirloom species roses offer an excellent alternative to hybrid teas, grandifloras and floribundas. But which ones of these species and their cultivars (cultivated varieties) are reliably hardy?  The following species are a good place to start when choosing hardy roses, and are based in part on several years of trials at the universities of Vermont and Maine.

Make sure when buying a species rose, particularly one other than these listed, that it is hardy in your area.  You can find the most recent USDA hardiness zone map online at www.planthardiness.ars.usda.gov.  A few species roses will tolerate part shade, but most require full sun (6 or more hours of direct sun daily) to grow and bloom best. 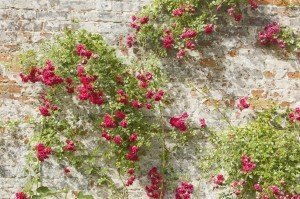 Albas are cultivars selected from an ancient species alba that may predate the Roman Empire.  They are generally tall and upright, the thorny canes arching with age. Most are large but graceful, so allow enough room and prune only as needed.  Leaves are soft and downy with gray, scentless leaflets.  The quite fragrant white or pale pink flowers bloom once, early in the season, and are followed by orange fruit (hips).

Perhaps the most common alba rose is ‘Maxima’, the white cottage or Jacobite rose, having double white flowers in June.  Other hardy choices that have good disease resistance are the light pink double ‘Felicite Parmentier’ (being under 5-feet tall, a good one for smaller spaces), the pink double ‘Koenigen von Daenemark’, and the light pink double ‘Maiden’s Blush’.  The white double ‘Pompom Blanc Parfait’ is taller, so good as a climber.

Not quite as hardy (to zone 5a, or -15 to -20 degrees F) are the Provence or Cabbage roses centifolia.  ‘Fantin Latour’ has light pink, very large double flowers in June that are very fragrant. Leaves are quite disease resistant.  ‘Spong’ has pink, double flowers with some fragrance.  Being rather large plants, upright 6 to 8 feet tall, they are good in borders or as climbers.

‘Kazanlik’ is a hardy cultivar of the Damask rose, or Rose of Castile x damascena.  It is another large rose, similar to the centifolias.  The deep pink, double, and very fragrant flowers of this rose are used in rose oil and pot-pourri.  It has attractive rose hips, and good disease resistance.  Many of the other damask roses are not reliably hardy, a couple that may grow in zone 5a being the white, double ‘Mme. Hardy’ and the light pink ‘Celsiana’.  Both are very fragrant.

The Sweet Briar rose eglanteria is quite hardy, growing only 5 to 6 feet high and wide.  It has rosy-pink flowers in June, followed by orange-red hips.  The leaves are sweetly scented.

The Gallic or French rose gallica is centuries old.  Perhaps the most known is the Mundi Rose, a variety versicolor.  Hardy into warmer areas of the north (zone 5a), it has fragrant, semi-double flowers in June with white and red stripes on pink petals.  It is good for smaller spaces, only growing 3 to 4 feet high and slightly wider.

The Red-leaf rose glauca or rubrifolia has reddish purple leaves which provide a backdrop for the fragrant, cherry-pink flowers in June.  The purple-red hips that follow last into winter.  Stems may die back some winters, but usually regrow in spring.  Plants have an oval to
round shape, growing 5 to 7 feet tall and a bit less wide.

Harison’s Yellow Rose foetida is also called Pioneer rose.  These arose from a seedling of this species in the 1820’s garden of attorney George Harison in New York City, and were planted westward along the Oregon trail, hence the names. It makes a dense shrub 4 to 6 feet high and wide.  The many double yellow flowers begin in June and last for several weeks.

Roses that you often find listed or for sale, and are hardy, are the Multiflora and Rugosa roses.   These are not discussed here, as they have been found to be invasive (seeds spread by birds) in pastures and open areas for the former, and beaches or shorelines for the latter. The multiflora has been used as an understock in grafting, and the thornless species inermis has often been used for hedges and windbreaks in Canada.  A variety of multiflora rose platyphylla that is attractive and you may find is the Seven Sisters rose, named for the various shades of pink and red one often sees in the flowers.

The Swamp rose palustris is a hardy native to the eastern U.S.  As it tolerates seasonal or periodic flooding, it is good in rain gardens and marginal wet areas.  The pink flowers have some fragrance, and are followed by red hips, then red leaves in fall.  Stems are thorny. It grows 3 to 6 feet high and wide.

The Scotch or Burnet rose spinosissima is a low, dense, spreading shrub 2 to 3 feet high and twice that wide, forming thickets.  It often is massed as a groundcover.  As the species name indicates, stems are covered with prickles.  White flowers are relatively large.  The cultivar ‘Stanwell Perpetual’ has double, very fragrant, light pink flowers and the plants have good disease resistance.

The quite hardy Virginia rose virginiana is native in Vermont.  It too spreads by suckers to form dense colonies, plants 4 to 6 feet high.  It begins with pink to purplish flowers in June, followed by red fruit in summer and fall, then finishing with red-orange fall foliage.

The Memorial or Sunshine rose wichuraiana grows in the warmer parts of the north (zone 5a).  This makes a very low groundcover, only growing a foot or so high, and the trailing canes rooting as they grow along the ground to form a mat.  It is not dense, so weeds can grow among the canes. It has shiny green leaves, small white flowers, and reddish fruits.

The Manchu rose xanthina has red stems that lack spines.  The yellow, semi-double flowers in June are followed by red hips, then orange fall color.  It grows large, reaching 6 to 9 feet high and 7 to 10 feet wide.  It is quite hardy in warmer areas of the north (zone 5a).  The Manchu rose, as you might guess, is from northern China.  It was first found there by Frank Meyer in 1907, and first bloomed in the U.S. at the Arnold Arboretum in Boston in 1915.  A form of the Manchu rose with single yellow flowers, Father Hugo’s rose xanthina f. hugonis, has fine-textured foliage and arching canes.

There also are quite a few series of roses such as the Explorer and less hardy Knockout ones, usually hybrids and often with some of these species roses as parents.  You can learn more about these “shrub roses” in another online article at pss.uvm.edu/ppp/articles/hardyroses.html.