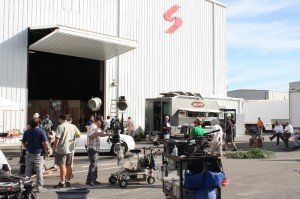 St. James Plantation is not only The Number One-Selling Community in The Coastal Carolinas, but it is also just a short ways away from several Hollywood filming locations!  Southeastern North Carolina’s gorgeous weather and picturesque scenery make it not only a wonderful place to live and retire, but it also make it an ideal backdrop for movies and television shows.

Ever since the 1980s, the area in and around Wilmington, NC, known as southeastern NC, has been a haven for movie and television filming. After visiting Wilmington for the production of the movie, “Firestarter,” Producer Dino De Laurentis bought land near downtown Wilmington to open his East Coast studio which would eventually become today’s EUE Screen Gem Studios. The studio has seen the production of numerous popular television shows and movies in the past few decades and is a main reason why Wilmington is nicknamed “Hollywood East” or sometimes referred to as “Wilmywood.”

The summer of 2012 was full of activity and filming for the blockbuster film, “Iron Man 3.” Wilmington and surrounding areas saw the arrival of A-list celebrities like Gwyneth Paltrow and Robert Downey Jr. who were spotted at many local retail stores and dining establishments. Iron Man 3 crews also spent about ten days filming beach and aerial shots in Oak Island near the St. James Plantation Beach Club’srare south-facing beach.

The film, “Safe Haven,” which is based on the book by the same name by author, Nicholas Sparks, was filmed predominantly in Southport, NC, Oak Island, and Caswell Beach. Southport even has a walking tour and filming site map that highlights filming locations for this popular movie.  And, several of our St. James Plantation residents were extras in the film!  The area has also been the filming location for 12 other Nicholas Sparks film adaptations and the movies, “A Walk to Remember” and “I Know What you Did Last Summer.”

Fox’s popular new television show, “Sleepy Hollow” is a modern-day retelling of the old tale of Ichabod Crane and the Headless Horseman. This show films mainly in downtown Wilmington and parts of Brunswick County–including historic Brunswick Town, which is just a short drive away from St. James Plantation.

“Under the Dome” is a television show that has been adapted from a book written by worldwide bestselling author, Stephen King. Much of the filming for the show also takes place in Brunswick County and the towns of Southport and Burgaw, NC.

Dawson’s Creek and One Tree Hill

The widely popular teen television shows, “Dawson’s Creek,” which aired from 1998 to 2003, and “One Tree Hill,” which aired from 2003 to 2012, were also filmed in southeastern NC. EUE Screen Gems Studios offers tours which include an inside look at some of the sets used for both television shows. There is also a downtown Wilmington walking tour of filming sites that includes many locations used in both hit teen dramas.

If you’d like more information on the North Carolina coastal community of St. James Plantation and our wonderful real estate opportunities, call (800)245-3871 or email us today.