With Thanksgiving over, it is now the joyful Christmas season. What better way to get in the holiday spirit than to explore some Christmas festivals, specifically in the Southeast, where the weather is still warm enough to be enjoyable. These seven festivals and events will awe you with their bright lights, warm you with their cheer, and make you happy just to be alive, filled with the wonder of the holidays.

This holiday tradition began back in 1895 when George W. Vanderbilt first welcomed guests to the Biltmore Estate on Christmas Eve. Now, you can enjoy views of dozens of Christmas trees and miles of ribbons, garland, and lights, along with musical performances that fill the halls of the Estate with seasonal cheer.

This year marks the 88th annual Natchitoches Christmas Festival of Lights. This festival runs from November until January 6th, with different events offered almost every night. The actual festival is on December 6th, featuring 300,000 + lights, a pre-show 5K, a parade, and a musical event in downtown Natchitoches, ending with fireworks over the Cane River Lake. For most of December, visitors can also get photos with Santa.

Since 1985, the Oglebay Resort in the city of Wheeling has hosted the six-week-long holiday light show. One of the nation’s largest light shows, the Winter Festival of Lights covers over 300 acres and a six-mile winding drive through the resort. In 2008, the festival went green, committing to the use of energy-efficient LED lights only. 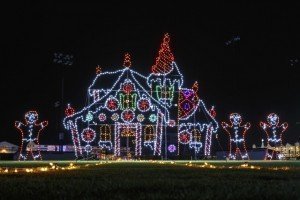 Located atop of Lookout Mountain, Rocky City Gardens hosts many enchanting events, but the Enchanted Garden of Lights is by far the most luminous and beautiful. Running from now until January 3, 2015, offers not only the glory of lovely Christmas lights, but also provides visits with Santa and Jack Frost, as well as nightly performances. There’s gingerbread cookie decorating for the kids and even a VIP experience of having dinner with Santa.

This festival features more than 700 displays and over 2 million lights. Running from now until January 1st and located within the James Island County Park, this festival brings the Christmas season to life with its dazzling display of lights. More than just a driving tour, the festival is also a place where patrons can park and explore lights up close. There is even a Victorian carousel and mouth-watering treats available at Santa’s Sweet Shoppe.

100 Miles of Lights: From Richmond to Virginia Beach

This award-winning event takes place along the 100 or so miles between Richmond and Virginia Beach, including seven host cities: Richmond, Williamsburg, Portsmouth, Newport, Hampton, Norfolk, and Virginia Beach. Not only can visitors see hundreds of thousands of lights in each city, but they can also enjoy holiday parades, seasonal marketplaces and bazaars, ice skating, carriage rides, and caroling.

Celebrate the holiday season in historic downtown Southport! Running from December 4 until December 13, this festival brings all kinds of Christmas festivities and events to the downtown area. From the Christmas Musical (Cinnamon G.R.I.T.S) at Amuzu, to Supper with Santa’s Elves, to the Christmas Flotilla, this is a great way to get in the holiday spirit!