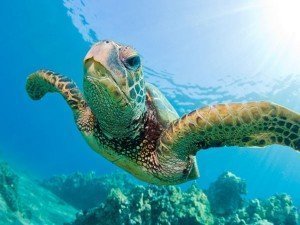 Sea turtles—they were pirate Jack Sparrow’s (Captain?) escape method after being marooned on an island from a mutiny aboard his ship. “He roped him a couple of sea turtles, lashed them together, and made a raft.” (Pirates of the Caribbean) Go-with-the-flow sea turtles “Crush” and “Squirt” helped clownfish “Marlin” in his search for his son, “Nemo,” in Finding Nemo.

While sea turtles are really not raft material (I do not think they would appreciate being “lashed together”), they, fictional or not, are pretty amazing reptiles. As one of Earth’s most ancient creatures, they have remained unchanged for the last 110 million years. I am sure if they could talk people would be eager to listen to the great stories they would have to tell, all of which would leave us in awe. Sea turtles were around with the dinosaurs, and as dinosaurs went extinct, sea turtles carried on as a champion in Darwin’s game. From their 110 million year reign, we have been able to learn so much about these fascinating creatures.

There are seven species of sea turtles living in the Earth’s oceans today, and six of them can be found in most waters around the world—Green, Hawksbill, Kemp’s Ridley, Leatherback, Loggerhead, and Olive Ridley. The Flatback is the only one out of the seven who keeps to his Australian homeland. Though they have put up a good fight for millions of years, they face many dangers as they journey through the sea. There are the usual predators like sharks as adults, and crabs as hatchlings, but another one of the enemies they face are humans. Accidentally becoming entangled in fishing gear, ocean pollution, and habitat loss are just a few of the fights sea turtles take on. The good news, though, is that we can also help save them.

Females are the only ones who return to land after hatching. They return to the same place they were born to dig a nest and lay their own eggs, an event that can occur more than once during the nesting season, and requires a trip from feeding grounds to nesting beaches that could be thousands of miles long. In a way, female sea turtles are like celebrities. Sighting one as she crawls up the beach to make her nest is an exciting moment, but she does not like being bombarded with lights and camera flashes. For those of us lucky enough to witness something like this, as exciting as it is, we have to respect her privacy. Walking up to it, putting it in the spotlight and trying to take pictures might scare her away before she has completed her nesting. It is best to keep your distance, and keep it dark.

Light is a tricky thing for baby sea turtles, too. Hatchlings free themselves from their nest in the dark of the night, and rely on the light from the moon and stars reflecting on the ocean to point them in the right direction. But with artificial light pollution, sometimes the babies get confused, thinking a porch light on a beach house is leading them to the ocean. To help the little ones make it safely to the water, beach front houses can close blinds and turn off any unnecessary outside lights. For nighttime beach strollers, keep flashlight use to a minimum. There are pesky predators out and about, too. Some people take it upon themselves to sit near a nesting site with a flashlight, making sure that ghost crabs are not harming the little ones.

Unlike other turtles, sea turtles are not able to pull their head and legs into their shells for protection. Even if they could, their shell would not protect them from ocean pollution. Like we appreciate a nice, clean, trash free beach, turtles appreciate clean, trash free waters. Pick up any trash—your own and any you might see lying around—to keep sea turtles from confusing our waste for a tasty morsel.

Sea turtle conservation can even be as simple as just donating to a conservation organization that helps with research, education, advocacy, and the protection of important habitats. There is even the option to adopt a sea turtle, or possibly become a volunteer with a local organization. This past June in Topsail Island, North Carolina, 28 sea turtles were released back into the water thanks to the tremendous efforts of the volunteers of the Karen Beasley Sea Turtle Rescue. Hundreds of people gathered to watch as the turtles re-entered their home, healed and ready to take on life on their own again. Other sea turtle rescues can be found along the coast, like The Georgia Sea Turtle Center in Georgia, the South Carolina Aquarium Sea Turtle Rescue in South Carolina, and The Turtle Hospital in Florida.

You can make donations to any of the sea turtle rescues mentioned above, or donate here.