The way Mike Haase sees it, you’re never too old to rock-and-roll. He’s living proof. He might be over sixty and ten years into a debilitating fight with Parkinson’s, but put him up on stage with a guitar in his hand and a dancing throng in front of him and suddenly the world is a 1965 Malibu convertible and he’s got the keys. 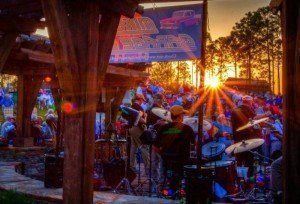 Haase is the co-founder, creative force and spiritual leader of Mike’s Garage Band, a seven-man combo of St. James Plantation residents that’s gaining renown all across Brunswick County. He plays guitar and harmonica, does back-up vocals, handles the booking and manages the website (www.MikesGarageBand.com). He’s also composed more than a dozen songs, including the official song of the Town of Southport.

Mike’s Garage Band has been together for three years and has played more than 40 gigs – from Wilmington to the South Carolina line. From the start, they made a commitment to donate every dime from every gig to charity, and have now raised close to $300,000 for such organizations as Habitat for Humanity, the Pretty in Pink Foundation, Operation at Ease and the Brunswick Community College Scholarship Fund.

They call themselves a band for the ages, and they’re not kidding. Their collective age is somewhere north of four-and-a-half centuries. The oldest – 70-year old bassist Ken Haubrick – was already a teenager when Elvis Presley got drafted in the Army. Haase jokes the band’s biggest challenge is staying awake through the last set. He says they don’t take breaks between sets, they take naps!

But onstage this band is no joke. These old guys can really play, mostly the tunes they grew up on in the Sixties. They are masters of musical arcana, a veritable encyclopedia of legendary bands from that era – The Beatles, The Temptations, a little Sam & Dave and a whole slew of classic soul and rock, but they also cover a bunch of bands that the current generation has probably never heard or heard of, like Sam the Sham and the Pharaohs (Wooly Bully, y’all!), The Kinks, The Young Rascals and Grand Funk Railroad. They can play for hours and never leave the early Sixties.

“We’ve got three rules about the songs we choose,” Haase says. “They’ve got to be recognizable, they’ve got to get people up on the dance floor, and they’ve got to bring back the feelings from the days when we were all young.”

He’s convinced the music has rejuvenating powers, and not just for the band. “The highest praise we ever got was from a woman who said we were like a magic act, the way we turned her and the rest of the crowd into teenagers again,” he said.

The genesis of the band, a retirement dream job, dates to a Christmas Party in 2010 that Haase and his wife attended at Tony DeFilippis’s house in the Woodlands Park neighborhood of St. James Plantation, a 6,000-acre community near Southport, where he’d just moved after 35 years as a senior sales and marketing executive with Caterpillar in Raleigh. When he arrived at the party, the first thing he saw were two guitars hanging on the living room wall.

“I asked Tony if he played and he said yes,” Haase said. “He said he’d always wanted to play in a band but never had the chance. I told him I played in high school and college, and I always wanted to get back into it. I asked him if he’d be interested in playing together. The next thing you know we’re talking about starting a band.”

They placed a notice in a St. James newsletter seeking other residents who might be interested in joining them. By summer, they’d recruited five more members and had begun practicing. By fall, they’d gained enough confidence to play in public.

“We booked the Woodlands Park amphitheatre for October 18 and printed some flyers,” Haase said. “We booked the St. James Community Center as a back-up in case it rained. Good thing we did because naturally it rained that night. Man, were we surprised when over 300 people showed up. A little nervous, too. But it was amazing. People started dancing and we just got into it and rode the energy of the crowd.”

It was also on that night that the tradition of giving to charity was born. “We had some small expenses, and we asked the crowd to throw any amount they liked into a guitar case,” he said. “We ended up with $500 above expenses. There was no debate about what to do with the money. We all felt it had to go to charity, and decided right then that’s what we’d do with any money we got from then on.”

Six of the original seven are still with the band – Haase on guitar, harmonica and vocals;DeFilippis, Chuck Krambuhl and Mike Horgan on guitars; Haubrick on bass; and John Staryak on keyboards. Marty Wozniak, the original drummer, left the band to focus on a new business, and Dave Holley has taken his place.

Haase says Staryak – who doubles as music director – is the band’s heart and soul. “He’s played in bands since he was in high school, and knows what it takes to make rock-and-roll work. Plus, he’s a perfectionist. He makes us practice until we get the sound exactly right before we take it to the stage,” he said.

Unlike younger bands with dreams of endless fame and fortune, Mike’s Garage Band has a more limited horizon. “We started the band to play the music we love and have some fun and give something back,” he says. “It couldn’t have worked out better. It’s a retirement dream job. We’re having so much fun I hope we can keep it for a good while to come.”

***
If you’d like more information on the #1-selling retirement community of St. James Plantation, our active lifestyle, or our fantastic real estate opportunities, call (800)245-3871 or email us today.