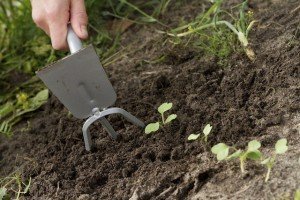 Fall is an excellent time to prepare garden soils for spring, for several reasons.    You usually have more time than in the busy spring.  One of my favorite reasons is that, being at the end of the growing season, weeds don’t regrow!  Often in the spring soils remain too wet to “work” for long periods.  Amendments added in fall have time to incorporate before spring.  Removing diseased plants in fall keeps such diseases from overwintering in the soil, only to reemerge the following growing season.  Of course if you are planting fall crops such as spinach, or garlic in fall for the following season, you’ll need to prepare the soil first.

When removing old vegetation, whether vegetables or weeds, don’t put them in the compost if they are diseased, have weed seeds, or thick stalks that are difficult to decompose.  Instead, bag such and take them to a recycle center where they are equipped to deal with such.  If weeds have gotten away from you and gone to seed, try to carefully cut off the seeds first and remove them so that they won’t disperse around the garden as you pull up plants.

For perennial weeds, make sure to remove any roots, or they will regrow next year.  Tilling them in will only break up the roots into many more pieces, multiplying your problem next season.  For weeds with wide-spreading root systems, such as some grasses, you may need to use a synthetic or organic herbicide to kill them back.

If you can get the garden cleaned up by early fall, you can plant a cover crop.  This is simply a crop such as oats or clover that will protect the soil from erosion, and add important organic matter when tilled in later.  If later, winter rye is about the only choice.  If frosts have begun, it is probably too late to establish a cover crop before winter.

Tilling the soil, once you’ve cleaned off any plant material, is generally not a good idea unless you simply want to incorporate organic matter or the site is new.  Tilling actually destroys soil structure, and buries the microorganisms that live in the top three inches or so of the soil, and which are important for soil health.  Tilling repeatedly also creates a “hard pan” or fairly impervious, compacted layer at the depth of the tiller tines—about 6 inches.  Water and roots can’t penetrate such a hard pan easily.  Soils generally contain a lifetime supply of weed seeds (unless harsh pre-emergent herbicides have been used).  Tilling will bring buried weed seeds to the surface where they can germinate.

Tilling of course creates bare soil, and this is not good for several reasons.  Nature doesn’t like bare soil, and wants something green there.  If you don’t have it covered nature will,  in the form of weeds.  These blow in and germinate readily on bare soil.  Bare soils are exposed to the sun, which can vaporize and decrease soil nitrogen, and kill off those important microorganisms near the soil surface.  Bare soil, also, is subject to erosion by wind and water. 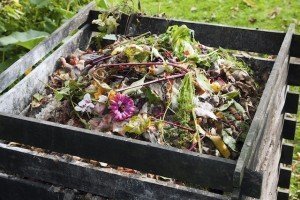 Instead of tilling, loosen established soil beds simply by inserting a garden fork every few inches and rocking it back and forth.  Surface cultivate for weeds around plants, and use mulches in rows.  I like to use several layers of newspaper, covered with weed-free straw, in rows.  Not only does this keep the weeds down, but provides a great surface to walk on and kneel on when weeding.  When incorporating organic matter into the soil, use a garden “claw” tool to work it into the surface.  You might even set up such garden rows and paths in fall, ready for spring.

Fall is a great time to test the soil, so you know what is needed (if anything) when planting in spring.  This is especially true for lime—often needed to raise the soil pH or make it less acid.  Most forms (such as the common dolomitic lime) take some time to work, so adding them in fall means the soil will be at the right pH (or soil acidity) by spring.

You can contact your local Extension Service office for a soil test kit, or find them at some full service garden stores.  State universities do the soil tests, and provide results tailored for your region.  Inexpensive home test kits can be purchased as well, although these are less accurate, especially if they are old and the testing chemicals not fresh.

In addition to possible nutrients such as lime, fall is an excellent time to add soil amendments such as the organic matter already mentioned.  This breaks down in soils, so you need to add it yearly.  Organic matter loosens heavy clay soils, helps sandy soils hold more water and nutrients, and by attracting all those soil microorganisms makes soils healthier.

Compost is perhaps the most common amendment.  Add an inch layer on soils, and work in several inches using a garden fork, rake, or claw.  Add a bit more if a new site or poor soils (clay or sand).  For 1000 square feet, for an inch layer of compost, you’ll need about three cubic yards.  You can buy this in bags but, for large amounts such as this, check locally for bulk deliveries.

If a local compost product, make sure it is free of weed seeds.  If it hasn’t been produced properly (at high enough temperature or using livestock manure which often contains hay seeds), you’ll fill your garden with all manner of weeds.  Test such products before applying, simply by putting some in a pot, watering, placing in a warm spot and seeing what germinates (hopefully nothing).

Other sources of organic matter include shredded leaves and dehydrated cow manure, or bagged garden soils (good for raised beds and smaller areas) containing compost.  Don’t use fresh wood products, such as sawdust, as they rob the soil of nitrogen as they break down.