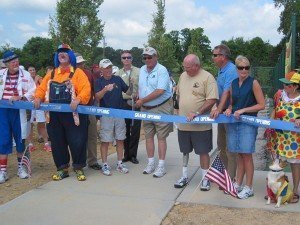 Similar to tennis, but with a few small differences—it’s played on a smaller court using a paddle and a plastic ball—the fastest growing sport in America has found a large following at Tellico Village. The tenth biggest group of players in the world, to be exact, and the largest community of players in the state of Tennessee.

Tellico Village, nestled in the foothills of the Great Smoky Mountains, is a Tennessee active adult community that boasts a mild four-season climate, three premier golf courses, and the pristine Tellico Lake, where you can enjoy a variety of water activities. For the Pickleball fan, though, Tellico Village also is a perfect destination.

On June 4, the Pickleball community within Tellico Village—hovering around 400 people—celebrated the grand opening of eight new outdoor courts. This was a great accomplishment from the community’s meager beginnings using two courts inside the gym. There are plans to expand the eight courts into twelve in the future.

Dan Dyer, the president of the Pickleball club, spoke at the grand opening. The sport was introduced to Tellico Village after resident Bob Cherry’s visit to Florida. The club, starting out with a dozen or so members, has grown to hundreds of members and only continues to grow. Things are taken very seriously in this Pickleball club, Dan stating that to keep the players happy and competitive, they train the new members, maintain a website, send out news and information emails, evaluate player skill levels, and provide formal training. But take a deeper look into this club, and you will find that it’s more than just “hitting a ball over a net.”

“It is a very social game with a lot of interaction between players.” Dan said. “We have weekly dinner parties, chili cook-offs, cookie swaps, boating parties, hamburger feeds, tournaments, women’s play, men’s play, and a new league is starting.” 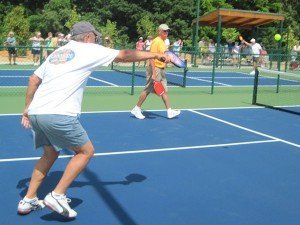 The great thing about pickleball is not only the social part but the fact that you don’t have to be super athletic to play. “Many, many of our members play on artificial knees and hips,” Dan said. “Pickleball courts are small and allow a player to cover much of the court with finesse rather than just speed.”

The sport got it’s start in the 1960s and has grown to be favorite sport of Baby Boomers because it is physically easier to play. Players are close to the net, which makes it easier for them to talk which adds a big social aspect to the game.

So far the Tellico Village Pickleball Club has its own National Champion (Mike Kitchens), and twenty residents competed in the state’s Senior Olympics. Some even qualified for the National Senior Games next year. And that’s not all. Big things are in the works for the club within the coming year.

“We’re spreading.” Dan said. “ Our Pickleball Ambassador, Ke Kai Ruckstuhl, and other volunteers have been instrumental in starting new clubs in Maryville and Knoxville. We’ve set up courts in Lenoir City.” The club has even trained 100 elementary school kids on how to play in Loudon and Lenoir City.

“For many, like me, pickleball is a way of life and meeting new friends,” Dan said. And Tellico Village is the perfect destination for the pickleball way of life.

Tellico Village is a lakeshore community in east Tennessee that offers a unique combination of natural beauty, mild four-season climate, outstanding recreational facilities and close proximity to Knoxville and the Smoky Mountains. Read More...
Your Information Request for your selected properties
Share this with friends!