The Solomon’s Seal is a low maintenance, long-lived, hardy perennial well-adapted to shady sites.  It has attractive flowers early in the season, no significant problems, and several variations.  Perennial professionals think highly of it, having voted it the 2013 Perennial Plant of the Year of the Perennial Plant Association. 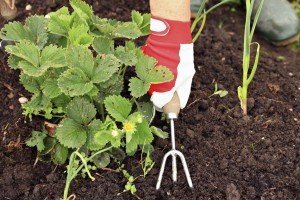 The plant spreads slowly by underground jointed stems or “rhizomes”.  The genus name Polygonatum refers to these, coming from the Greek words for many and knee joints.  Flowers have a slight lily-like fragrance, which is referred to in the species name odoratum.   The common name has several possible meanings, a common one from scars on the roots said to resemble the seal of ancient Hebrew King Solomon.  It is currently in the Asparagaceae or Asparagus family, having evolved through 3 former families as botanists reorganized them.

Most commonly found and used is the variegated Solomon’s seal Polygonatum odoratum var. pluriflorum, the cultivar being ‘Variegatum’.  While the species has dull green leaves off of the arching stems, 2 feet or so high, this variegated one has narrow white bands along leaf edges.  Leaves are lance-shaped, alternate up the stems, and turn yellow in fall.  New stems have shades of dark red.  Stems and the variegated leaves are attractive in arrangements.

The variegated leaves are echoed by the white, tubular  or bell-shaped flowers (just under an inch long) that hang from the stems from where each leaf joins the stem (leaf axils).  They’re either single or in pairs. These appear in April in warmer climates, May in the north.  On the species, these flowers have green tips.  Flowers are followed in fall by blue-black berries about one-quarter inch wide which, too, hang down from leaf axils.  Flowers are self-fertile, having both male and female parts, and are pollinated by bees.

The species is native to temperate regions of Asia and Europe, and can be found growing on shady slopes and in woodlands.  The common variety is native to Asia, the name meaning “many flowered”.  Plants grow best is soils found in native habitats, being moist and with lots of humus or organic matter.  If you don’t have this, add plenty of peat moss or compost prior to planting.

Plants will tolerate less than ideal conditions and, once established, even tolerate some drought.  This makes them a good candidate for rain gardens. In the north, they may perform fine in full sun if sufficient moisture.

Good companion plants are ferns, hostas, coralbells, foamflowers, barrenworts, wood aster, and variegated Siberian bugloss. If you need to move or divide them, this is best done in spring as they emerge, or early fall. Replant roots just below the soil surface.

While this plant has no pest or disease problems, and isn’t bothered by deer or rabbits, particularly the young shoots may be nibbled by slugs or snails.  It shouldn’t be nibbled by humans, as small amounts of saponin and convallamarin (a cardiac glycoside) chemicals in the plant may cause gastric distress. Yet it has been used in traditional Chinese and Korean medicine for centuries, and in Korea a tea is made from the roots. The Handbook of Medicinal Herbs lists about a dozen medicinal uses.

You may find a number of cultivars of the common species odoratum from specialty nurseries and online.  ‘Goldilocks’ has whitish streaking through the leaves.  ‘Angel Wing’ has very wide white margins on leaves. ‘Byakko’ has white splotches near the leaf bases.  ‘Double Stuff’  has margins about double the width of the regular variegated cultivar.  ‘Koryu’ has mainly green leaves with a raised ridge down the center.  ‘Spiral Staircase’ is a recent introduction from Korea with larger leaves and slightly twisted stems.

A related species multiflorum is similar to the common species odoratum, only grows to about 3 feet high.  A hybrid of these two won the RHS Award of Garden Merit in Britain.  A dwarf species humile only gets 6 to 9 inches high.  A Chinese introduction macropodum, the Big-footed Solomon’s Seal, has plain green leaves, lots of flowers, and grows to 3-feet high.  A Japanese species falcatum is often misapplied to the common variegated species already described.  A couple cultivars of it that you may find include ‘Tiger Stripes’ with creamy veins, and ‘Silver Lining’ with a dramatic white central stripe.

The smooth Solomon’s seal biflorum is native to eastern and central North America.  Early Americans used its starchy roots as a potato-like food.  A variety of this native species commutatum may reach 7 feet tall.  The native Hairy Solomon’s Seal pubescens is similar to the smooth, only with minute hairs on veins under the leaves.

If you’re a more experienced perennial grower or collector, consider one or more of these choice cultivars or different species.  If you’re a beginning gardener, or just want some color in the shade garden with little care needed, consider adding several plants of the common variegated Solomon’s Seal.

Distribution of this release is made possible by the University of Vermont and New England Grows–a conference providing education for industry professionals and support for university outreach efforts in horticulture.