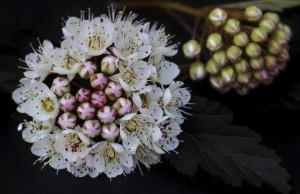 Once considered a non-descript native shrub for the old-fashioned garden, breeders have transformed ninebark into a popular and desirable landscape plant.  With various leaf colors besides green, from yellows to dark red, attractive flowers and bark, the ability to withstand tough conditions, and few if any pests or diseases, ninebark is a low maintenance, easy to grow, and attractive group of large shrubs.

Common Ninebark (Physocarpus opulifolius) gets its name from the several layers of peeling (“exfoliating”) bark on mature branches that reveal reddish to light brown inner bark, particularly attractive in winter when they can be seen easily.  This shrub has an upright, spreading habit, and generally reaches 5 to 8 feet tall and 6 to 10 feet wide, although there are some smaller cultivars (cultivated varieties).

In landscapes, ninebark can be used in masses, or as a screen or informal hedge.  Mix in the back of perennial beds as an accent or specimen, or use the dark-leaved cultivars as a backdrop.  On large banks it can be used for erosion control. Be aware when planting and using in landscapes that all parts of this plant can be poisonous to humans if ingested.  Ninebarks are generally resistant to deer feeding.

If you want to keep the plant more tidy, some of the oldest branches can be pruned out in spring, or the plant can be trimmed to shape after bloom. Cut back the stems about one-third after bloom to make plants more bushy. Don’t prune past mid-summer.  If a plant is large and out of control, it can be cut back to near the ground in late winter to rejuvenate, and it will regrow.

Listed as native to eastern North America, it is more common in U.S.D.A. hardiness zones 2 through 7 (northern U.S. and Quebec to Tennessee and northern Alabama).  There are several other less common species, although the native Pacific Ninebark (P. capitatus) is commonly seen in coastal western states and Canadian provinces, into Alaska. A dwarf cultivar of the common ninebark (‘Nanus’) has been used to develop improved lower selections.

Ninebark in the wild often is found along streams and watersides, even in areas that occasionally flood, although it will tolerate a range of soil conditions including drought once established.  It will grow in full sun to part shade.

Ninebark is in the rose family, and is closely related to the spirea shrubs with similar flowers in late spring to early summer.  The white to pinkish flowers are in dense, rounded clusters (“corymbs”) and are attractive to butterflies.  They’re followed by red seeds, brighter in some cultivars, that are attractive to birds.  Leaves can reach 4 inches long, and are egg-shaped (“ovate”) to rounded, and often have 4 to 5 lobes. Depending on cultivar, leaves come in various colors including dark red to purple, yellows and oranges.

Ninebark is no longer just “common”, with various comparisons describing its transformation into a popular and attractive landscape plant, such as a frog changed to a prince, or an ugly duckling to a swan.  The first of the new introductions, from 2000, and still popular is Diabolo (or ‘Monlo’).  It came about in Europe where ninebark are quite popular, and used for wildlife and erosion control.  This “sport” with dark leaves was found in a nursery, and put into production by the German nurseryman Gunter Kordes.

Diabolo has dark reddish purple leaves which fade to more green as summer progresses, then orange to burgundy colors in fall.  Its twiggy habit has been improved in newer cultivars.  ‘Lady in Red’ (more often seen as Ruby Spice) is an introduction from a British nursery, being a sport of Diabolo with pink flowers.  It has more compact habit and brighter leaves.

Another improvement is the popular Summer Wine—a cross by a Michigan nurseryman of Diabolo with the dwarf ninebark.  Only reaching 5 to 6 feet tall, it starts out with orange leaves which turn reddish burgundy to dark purple.  These contrast nicely with the soft pink flowers early in the season.  Summer Wine has much better resistance to powdery mildew disease—the whitish growth on leaf surfaces in mid summer—than the many other cultivars.

Newer, dark-leaved, low introductions are good for use in fronts of borders or along walks, and in small landscapes.  They make excellent alternatives to the invasive red-leaved barberries.  Little Devil (‘Donna May’, from a Minnesota breeder in 2005) only reaches 3 to 4 feet high and wide, as does Tiny Wine.  The pink flowers of the latter are different in that they are dense along the stems.

Burgundy Candy is part of the Gumdrop collection of ninebarks which came from breeding in Ithaca, New York in 2008 among ninebark seedlings.  This one is only 2 feet high and 2 to 3 feet wide with, as its name indicates, burgundy leaves.

The original yellow leaved cultivars, still popular and found in nurseries, are ‘Dart’s Gold’ and ‘Nugget’.  Both are crosses of the older and large ‘Luteus’ cultivar, which doesn’t hold the yellow color well in summer, with the dwarf ninebark.  ‘Dart’s Gold’ was bred in Holland, while ‘Nugget’ was bred at North Dakota State University.  Both are about 5 feet tall, and many growers consider ‘Nugget’ to have the more uniform and well-branched habit. Leaves emerge bright golden yellow, aging to lime green, then turning golden in fall. Similar in height and size to Burgundy Candy is Lemon Candy, only with bright yellow leaves.

‘Dart’s Gold’ has been crossed with Diabolo for selections with more orange or coppery leaves.  Coppertina (‘Mindia’ or Diable D’Or) from France in 2002 is similar to Diabolo only being more compact and branched, with leaves that begin coppery early transforming to dark red, smaller leaves, and good powdery mildew resistance.  ‘Center Glow’ leaves emerge bright red with golden yellow bases, then mature bright red purple.  This cultivar was developed by breeder Harold Pellet at the University of Minnesota in 2002.

Amber Jubilee arose in 2003 from a nursery in Manitoba as a cross of Diabolo with ‘Dart’s Gold’.  It has in gold, yellow, and orange right through the season, then they take on red and purple in the fall.  Similar in height and size to Burgundy Candy is Caramel Candy, only with dark green leaves that emerge dark red.