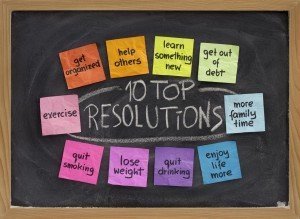 The height of my fervor for any given New Year resolution comes in around 11:30 pm on December 31st.

It occurs when I am in bed and thinking about the copious amounts of sugar cookies, and honey baked ham, and sweet potato casserole I have consumed during the entirety of December. My New Year’s Resolution has, before this year, been the same for as long as I can remember- to finally get in shape.

I share this resolution with the majority of America, all of whom long to finish those 10 k races and sit on the beach without fear of removing the fateful swimsuit cover-up.

Every year I fail at this- with varying degrees of misery.

After I fall asleep on December 31st, I wake up to January 1st– where someone has baked a cinnamon roll, or left the pecan pie from the night prior that I lose my passion for self-improvement.  It’s typically much too cold or I am much too tired to possibly go for a run.

On January 2nd, I may go for a bike ride and eat an apple but normally end up going out to dinner and ordering twice the amount a normal human should eat- all under the umbrella of logic that says: I exercised. I can eat what I want.

After the 2nd, my vigor wanes.

Once I managed to drag myself to the gym for the whole month of January. I ran a 5k in February, checked that box on my list and ate a dozen doughnuts. I quickly seceded into a world of sleeping in daily and only running in emergency situations.

The problem is, I put too much emphasis on waiting until the 1st of the New Year to make a change that could have benefitted me earlier in the previous year. With so much weighing in on whether or not the “resolution” pans out, it is so easy to quit all together. With a life style change so massive and looming, it feels overwhelming to go from one extreme to the other. For me those extremes would be from not physically active to very physically active.

The goal is too vague to ever complete. What do I mean when I want to be “in shape?” Is there a certain amount you have to run? A yoga pose you have to master? A certificate the gym can give you to let you know? I get frustrated and choose to just stay home to avoid it all.

This year I have decided to make two alterations to my normal New Year’s Resolution plan to avoid this feeling.

Firstly, I started running four times a week in early November. This way the idea of running longer distances in January doesn’t make me want to crawl under the covers. I think of it as a pre-game to the resolution.

Secondly, I want to be able to run a 10k by July in under an hour and twenty minutes. This is more specific and attainable. It sets the stage for my next goal, which won’t have to wait for the dawning of a new year.

Pre-planning my New Year’s resolution has taken the strain off of me with December flying by so fast. I feel hope instead of dread because I’ve already started. I’ve taken the hardest step. I have no worries that on 11:30 pm this December 31st, I’ll be untroubled by the brand new, exciting year of 2014.