Listening to the Loons at Eastman

Loons communicate with four basic vocalizations: the wail, the tremolo, the yodel and the hoot. The wail is their primary means of communicating from a distance. When nesting, loons wail to ask their partner to take over the nest, and, when raising chicks, they wail to invite their partner to relieve them of their parental duties or to indicate where food can be found. The simplest wail consists of three notes – a plaintive low-high-low, with the accent on the high note. In more urgent situations, a loon will add an extra higher note, or two, to the wail. I think of it like this: The basic, three-note wail means “Please come over here.” The more impassioned 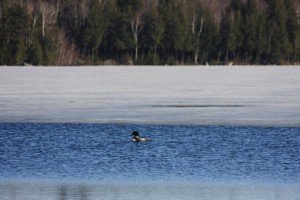 four-note wail means “Get over here NOW,” and the over-the-top five-note wail means “GET YOUR #*&@ OVER HERE RIGHT NOW!” According to the late Robert J. Lurtsema, the former announcer of WGBH public radio’s Morning Pro Musica program, loons wail in the key of E-flat, Mozart’s favorite key.

The tremolo, which some people think of as a “laugh,” is actually quite the opposite because it usually signifies fear or danger. If a loon gives a tremolo when you are near it in a boat, you may be frightening the loon. Like the wail, the tremolo can be sung at up to three levels of ascending musical intervals, depending on the perceived degree of danger. Loons also use this versatile vocalization in flight, where it does not signify danger.

The yodel is vocalized only by males who are defending their territory. The yodel starts low and then rises slowly to a high-pitched pattern that may be repeated as many as nine times. One night I heard sequences of up to six yodels, signifying a fairly heated confrontation on the lake. Every male has his own signature yodel, so, in principle, it is possible to tell if the same male has returned to Eastman Lake from last year. Many of the yodels heard in Eastman announce the arrival of an airplane, against which the male loon feels a need to protect his territory.

Finally, the quiet, owl-like sounds that loons use when communicating with one another up close are called hoots. Wail, tremolo, yodel and hoot: listen for them and you’ll understand the messages loons send to each other…and to us.

This 3,600 acre lakeside community is tucked in the Upper Connecticut River Valley in the Dartmouth-Lake Sunapee Region. Two hours north of Boston and minutes from Lake Sunapee, New London, Lebanon and Hanover, residents have easy access to medical facilities, employment, educational opportunities and a multitude of cultural venues. Read More...
Your Information Request for your selected properties
Share this with friends!