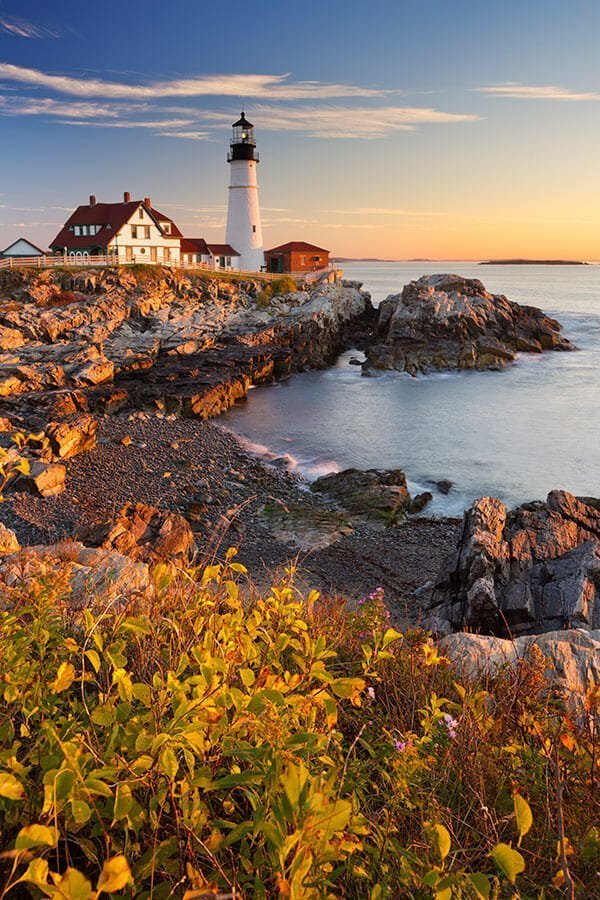 From Whale Oil to Windy Nights

A trip to the East Coast often means sandy feet, seashells, perhaps a pink-orange sunrise, and even that quintessential striped lighthouse standing tall above the water. While often appearing calm and deserted, few modern buildings surpass lighthouses as such solid examples of American ingenuity and bravery.

Following are the stories behind 17 lighthouses along the East Coast.
Don’t breeze right past that unassuming lighthouse on your next beach trip … an unexpected—and often breezy—history often accompanies it.

Before electricity, lighthouse keepers used oil to light fires in the top of the tower. At Cape May, the lighthouse keepers hauled whale oil, lard and kerosene up the 199 steps of this 1859 lighthouse every night before electricity came to save the day. Although it’s not the only thing guiding ships around the Delaware Bay now, this historic New Jersey landmark remains a centerpiece of local pride on the Cape May peninsula.

Aug. 7th marks National Lighthouse Day each year, and Cape May celebrates its own lighthouse accordingly. Enjoy guided historical tours to the top of the tower, make your own pirate hat, browse local crafts, and honor America’s dedication to safety for those at sea. Nearly 100,000 visitors annually come to enjoy the small-town, oceanfront charm of Cape May, known as “America’s First Seaside Resort.”

Perched on the inner Delaware Breakwater off the coast of Cape Henlopen in Lewes, DE, is the Delaware Breakwater East End Light. This lighthouse marks trials of the sailors in rough waters, lighthouse keepers who worked cramped days and nights to protect them, and workers who struggled to build the breakwater along the unprotected coast from Virginia to New Jersey. Life at the Delaware Breakwater East End Light was notoriously difficult, as the waves and winds were strong, and the tower was only 22 feet in diameter at its widest point. Fog here remained almost constant, often setting records. In fact, in 1905, the fog signal blared for 645 hours in just one year.

You’ll see the historic small towns and sandy beaches of the Chesapeake like you’ve never seen them before on a cruise out to the Thomas Point Shoal Lighthouse, which sits just south of Annapolis on the Chesapeake Bay. Built in 1875, it’s the only screw-pile lighthouse to still stand in the Bay in its original spot. It’s a white wooden cottage with a quaint red roof, shaped like a hexagon sitting on a tiny island of rocks out in the water. As one of only 10 U.S. lighthouses to be named a National Historic Landmark, the site is open to visitors during summer months as weather permits. Tours include a 30-minute boat ride from the beach, as it’s the only way to reach this historic offshore location.

A trip to Virginia Beach wouldn’t be complete without stopping to learn about Cape Henry’s past.
Secretary of the Treasury Alexander Hamilton received pleas to build a light source along Virginia’s Fort Story coast after nearly 60 vessels had been lost to treacherous waters by 1789. George Washington himself authorized the tower’s construction, making it the nation’s first federally-funded lighthouse. Today, the Cape Henry Lighthouse still stands near its newer counterpart, steeped in history as a marker for the place where English settlers first landed on New World soil in 1607. Tour the tower for amazing views over the area before taking a stroll along the Virginia Beach Boardwalk or spotting wildlife at First Landing State Park.

The Cape Hatteras Lighthouse in Buxton, NC, sits on the shore of the Outer Banks—but it didn’t always sit in its current spot. After rebuilding the cracked original from 1802, the iconic, white-and-black spiraling new structure was erected in 1870. As the nation’s tallest lighthouse at 208 feet, the tower was so revered that officials refused to let natural erosion bring it down. In 1999, a well-thought-out plan was executed, carefully transporting the 4,830-ton structure nearly 3,000 feet inland. A visit to the Cape Hatteras National Seashore also means world-class bird watching, surfing, kiteboarding, and miles of beaches to walk along—just look up from wherever you stand and you’re sure to see the striped tower amongst rolling sandy dunes and beach grass.

The Cape Charles Lighthouse is Virginia’s tallest lighthouse and the second tallest in the entire United States. It’s a 191-foot white steel skeleton with a spiral staircase up to its generator, built to be distinguished from its neighbor at Cape Henry and to withstand powerful winds that can whip right through it. This lighthouse had a rough history: the one standing today is the third attempt, as the first two were threatened by erosion and World War I, respectively. Once you’ve snapped some shots of the lighthouse, hitch a ride 20 minutes north to the Bay Creek Railway, where you can continue the history lesson on a restored 1913 interurban dining car for an hour-long scenic ride through the Chesapeake region.

Cape Lookout is the only lighthouse in the country with its distinct design of black-and-white diamond checkers. Sitting on the southern side of North Caroli-na’s Outer Banks, it’s one of very few lighthouses to operate during the day-time. As such, its design serves a purpose: The center of the black diamonds point north to south, while the center of the white diamonds point east to west. Even in the daytime, it flashes every 15 seconds, allowing people to see its light from 12 to 19 miles out to sea. A day at the Cape Lookout National Seashore wouldn’t be complete without a swim in the ocean, fishing, wildlife watching at Harker Island
Visitor Center, and a stop at the old lighthouse. Climb to the top, snap amazing photos of its one-of-a-kind design, and even tour the Keeper’s Quarters Museum to learn about life at the light station.

“Old Baldy” is North Carolina’s oldest standing lighthouse—it’s been standing in its original structure for nearly 200 years and was built to mark the port entrance of the Cape Fear River. A 108-step climb and guided tour brings you to the top of this whitewashed tower, but half the fun is getting there. Grab the ferry from Southport, NC, and the lighthouse is a five-minute walk from the boat landing. No cars are allowed on the island, so rent a bike or a golf cart to spend a day admiring “Old Baldy” from all angles on the island.

“Charleston’s Light” is one of the most modern lighthouses in the Carolinas and one of the most unique. Built in the 1960s, it’s a slim, triangular block. This tower has modern perks like air conditioning, an elevator, and an aerodynamic shape, allowing it to withstand hurricane-force winds. It’s not open for public tours, but the iconic black-and-white structure among rolling white dunes serves as a favorite photo opportunity for Sullivan’s Island visitors.

As if Daufuskie Island’s white beaches weren’t enough reason to visit, the Haig Point Lighthouse provides one more solid argument. Sitting on the Calibogue Sound, the historic tower was constructed in 1873. But as its name aptly explains, there’s actually an entire house with this light. Two rooms with queen beds, a dining room, two and a half baths, and an amazing view of the island from the front porch rocking chairs comprise the lower half of the building. The light extends up like a chimney.

Golf enthusiasts will recognize Hilton Head Island’s red-and-white-striped Harbour Town Lighthouse as the site of the feared 18th hole of the PGA TOUR’s RBC Heritage tournament on Harbour Town Golf Links. Others may know if from classic coastal wedding photos, as this spot is an iconic tourist and wedding photo location. Either way you look at it, the tower, built in 1969, is worth a climb for a gaze out over the glittering Calibogue Sound. And afterward, enjoy a round of golf, a dip in the ocean, or a boat ride out to see the light from an offshore perspective.

Little Cumberland Lighthouse marks the northern tip of Little Cumberland Island off Georgia’s southeast coast. The lighthouse and surrounding islands played a pivotal role in the Civil War, as the final shipment of slaves illegally entered the States there. Now on a private island only accessible to homeowners and their guests, a large dune prevents water tours from getting an actual view of the lighthouse and it’s not open to the public.

General James Oglethorpe originally ordered the Tybee Island Light Station to be built in 1732, making it one of only eight remaining Colonial-era light stations. Although the lighthouse itself was rebuilt several times, it remains an icon on the island today. Take a day tour or join an evening tour to watch the sun set from the best vantage point on the island. Stay at the quaint Lighthouse Inn Bed and Breakfast, a 1910 cottage just five minutes from the light station with family-style breakfast and a wrap-around porch, perfect for sipping sweet tea.

Amelia Island Lighthouse in Fernandina Beach is Florida’s oldest standing lighthouse. Besides being a photo-worthy historic landmark from 1838, the tower has a few features that set it apart from most lighthouses. It’s the westernmost on the entire East Coast, and it was built during a “Territorial Period,” during which buildings were built further from the shore for protection. All 59 steps up to the lantern are hand-carved from granite, with two additional flights of cast-irons stairs above them. Tours here are rare and personal; they’re led by Ms. Helen O’Hagan Sintes, a woman who actually spent her childhood living on the lighthouse grounds.

The St. Augustine Light Station at the north end of Anastasia Island originated in the 1500s as an old Spanish watchtower. After erosion threats and rebuilds in the 1800s, the tower that stands erect today was completed in 1874. Now the St. Augustine Lighthouse and Museum, the site serves as an educational site for kids, an archeological research center, and a museum to keep alive the history of St. Augustine, the nation’s oldest port.

The Cape Canaveral Lighthouse on Florida’s eastern coast is the only operating lighthouse owned by the U.S. Air Force. After thorough restoration to remove toxic lead paint, the 151-foot lighthouse can be toured as a part of the Air Force Space and Missile Museum. From the lighthouse, you can see launchpads for the Gemini, Mercury, and Apollo space programs.

After the U.S. Navy established a base on Key West, they quickly knew a lighthouse was necessary there; the shallow reefs off the coast made it tricky for boats to navigate between islands. The lighthouse opened in 1848 with a woman as the keeper, which was rare for the time. Now visitors can tour photographs and belongings of the keepers and their families who lived there, and climb the lighthouse’s 88 steps for gorgeous views of Key West’s charming harbors.