There is something wondrous about a lighthouse, guiding the way for ships at sea, a beacon in the darkness. Symbolic of truth and guidance, lighthouses are also mysterious places, due to their isolation. They mark dangerous coastlines and safe entries to harbors. While the number of lighthouses is on the decline, due to modern technology and the expense of upkeep, there are still a number of functional lighthouses in the United States, and in some of the best places to retire. In addition, many decommissioned lighthouses have been named historic places, and are exciting to visit and tour. From the west coast to the east, lighthouses are still used to help ships navigate treacherous coasts and to guide them safely to shore. 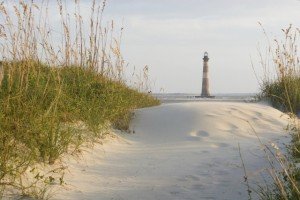 Morris Island Lighthouse (SC)—An unusual lighthouse in that it stands several hundred feet offshore, the Morris Island Lighth stands on the southern side of the entrance to the Charleston Harbor. Constructed in 1876, the original tower was 102 feet tall, from base to lantern. Today, it stands at 161 feet. Although the lighthouse was decommissioned in 1962 and replaced with the new Charleston Light at the north end of the harbor, Save the Light Inc. purchased the building in 1999 to preserve it for the people of South Carolina. Morris Island Light has been on the National Register of Historic Places since 1982.

Cape Henry Lighthouse (VA)—Guarding the entrance to the Chesapeake Bay, the Cape Henry Light was the first lighthouse authorized by the U.S. government in 1792. It remains in use today, fully automated since 1983. The original tower stood 90 feet tall, but a second tower, built in 1881 reaches up 157 feet. The lighthouse is open to the public with a fine view over the Chesapeake Bay.

Cape Lookout Lighthouse (NC)—Located on the Southern Outer Banks, this 163 foot wonder flashes every fifteen seconds and can be seen anywhere from twelve to nineteen feet out at sea. First lit in 1859, the lighthouse was automated in 1950. It is the second lighthouse that has stood at that location, the first of which was built in 1812. In 1873, the lighthouse was painted like a black and white checkerboard, its most distinctive feature. It is open from mid-May to mid-September. Visitors are encouraged to come during that time and climb the 207 steps up to the top of the lighthouse to experience a breathtaking view of the Outer Banks. 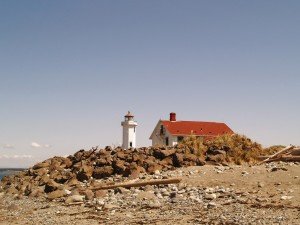 Point Wilson Light (WA)—Built in 1913 by the United States Lighthouse Service, this 51 foot lighthouse is the highest beacon on the Puget Sound. The current lighthouse replaced an earlier wood tower built in 1879. It remains one of the most important navigational aids in the state of Washington, connecting the Puget Sound to the Strait of Juan de Fuca.

A lighthouse is a guiding light, a lone beacon igniting the night. Up and down both the east and west coasts of the United States, you will find historic and working lighthouses to explore.