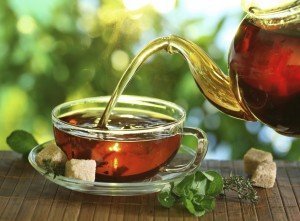 On a summer tour of Strawbery Banke historic gardens in Portsmouth, NH,  I visited one garden that featured plants used for “Liberty Teas.”  These were the true tea plant substitutes the colonists began using over 200 years ago after the Dec. 16, 1773 dumping of the black tea from ships into Boston harbor in protest of taxation. The black tea, also known as “bohea”, came from a plant (Camellia sinensis) of tropical climates.  Although commonly called “teas”, since these beverages don’t contain tea leaves, they are more accurately called “tisanes”.

One of the most common of these faux teas, or true tea substitutes, was the native American shrub New Jersey tea (Ceanothus americanus), also known then as Indian tea or Walpole tea.  Leaves of raspberry also were commonly used for these colonial teas, as were sweet fern and spicebush. Bark from some trees such as sassafras and willow were used. Little did the colonists know that most the oil in sassafras bark is safrole—a compound now banned by the FDA as a food additive as it causes cancer in laboratory animals.

Common flowers used for the Liberty teas were sweet goldenrod (Solidago odora), red clover, chamomile, roses, and violets.  Leaves of herbaceous plants such as bergamot (bee balm or Oswego tea), lemon balm, chamomile, and mints were brewed as many are today.  Many herbs were brewed in the 18th century including lavender, parsley, thyme, marjoram, rosemary, lemon verbena, and sage. Native Americans introduced the colonists to many of these plants, which they often brewed to use medicinally.

One of the most commonly used was the lavender-flowered wild bergamot (Monarda fistulosa).  While most of our current garden bee balms are of a different species (Monarda didyma), any bee balms can be used for teas.  The wild species though, found in wild areas and along roads, usually has the highest oil content, so use it sparingly.  Try a small handful of flowers and leaves per pot of tea.  It combines well with lemon and honey.

Even some fruits were used in colonial teas, including those of dried strawberries, blueberries, raspberries, and apples.  Rosehips, rich in vitamin C and used today in teas, were used then as well.  Some were combined, such as strawberry and apple.  “Indian lemonade tea” was made from boiling the berries of the red sumac.

Often ingredients were combined, such as a common tea recipe of that time including equal parts sweet goldenrod, betony, clover, and New Jersey tea.  If you want to try to make a simple Liberty tea, take leaves from the sweet goldenrod just before it comes into bloom.  Otherwise if you wait too late, leaves may become bitter.

Also known as anise-scented goldenrod, its leaves smell of anise when crushed—one way to identify it.  Other ways to identify the sweet goldenrod are that is grows 2 to 4 feet tall, has smooth or slightly hairy stems, and lance-shaped leaves to 4-inches long with parallel veins.  Leaves have solid margins, and translucent dots.  Flower clusters are branched and plume-like.   Individual flowers are in rows on the upper sides of the plume branches.

You either can dry the sweet goldenrod stalks, hanging upside down in a well-ventilated area out of direct sun but warm, then strip the leaves when dry; or, you can strip the leaves and dry them in a single layer on trays.  When leaves are crisp and fully dry, you can use or store in tight containers.  Steep a teaspoonful of dried leaves in a cup of boiling water for five minutes, or to taste.  Try combining these leaves with those of peppermint or spearmint.

Most plants such as these that the colonists used for their tea substitutes, as we use today for our herbal tisanes, can be brewed and enjoyed safely in moderation.  Some, such as the berry leaves, provide vitamin C and other healthy ingredients.  Too much of these supplements, from drinking too much of some herbal teas, can cause health complications.

Occasionally an herb may trigger an allergic reaction, such as those allergic to ragweed drinking chamomile tea.  Introduce such teas slowly to your diet to check for allergic reactions.  While mint is generally safe for most, it may worsen symptoms for those with acid reflux. If you have health issues, or are taking medications, its best to check with your doctor or pharmacist for interactions before beginning brewing and consuming herbal teas. It is generally recommended for children or those pregnant not to consume herbal teas, at least without professional advice.

When collecting leaves or flowers of other plants, first make sure you are positive what plant you are collecting to use for tea, especially if collecting from the wild.  If not your property, make sure you have permission to collect.  If only a few plants are in a wild population, make sure not to harvest more than a quarter of the plants so enough are left to multiply.  Best is not to collect along roadsides for safety concerns, and excessive dust, grime or road toxins.  If collecting from gardens, make sure no pesticides have been used on the plants.

Harvest in mid-morning once any dew has evaporated, before temperatures get too hot.  Wash leaves or plant parts and drain or pat dry.  If you cut many herbs back early in the season by half to two-thirds, you can usually get another harvest or two.  If using fresh plant parts, unless you’re familiar with their use and strength, start with a small handful per pot of tea.

If you want to save your tea harvest for later, you can dry in a dehydrator, or warm area with ventilation out of direct sun.  If drying, make sure your plants parts are completely dry.  Raspberry or strawberry leaves, for instance, are fine fresh or dry, but may cause gastric upset if wilted or only partially dry.

Place leaves or plant parts on paper towels, with another on top to protect from dust and keep from blowing away.  Allow to dry for about 10 days, or until they crumble and no longer feel moist.  Then store in tightly closed jars or containers. Or you can store in plastic freezer bags with all the air squeezed out.  Don’t crumble leaves until using, as much as possible, to preserve the most flavor.