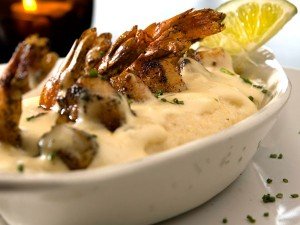 My grandmother’s grits were always the best. When I had grits cooked by others they did not come close to hers. They were very smooth, creamy, and full of flavor. Not gritty and tasteless. Many people have tried to get their hands on my grandmother’s secret, but she always kept it close to her heart, until one day she asked me if I wanted to help her make breakfast. That’s when I learned her secret, and have been making grits “Grandma’s Way” ever since. I have even converted my husband, who is from New Jersey, into a grits lover.

I absolutely cherish my grandmother’s “little secrets”, but I am willing to share this fantastic recipe with you so that you too can savor the rich and creamy goodness.

If you choose to just cook ordinary grits, just follow the directions according to the package; set aside and keep warm.

Grandmother’s Grits
Combine grits and milk in a bowl and set aside. Add salt to the chicken broth and bring to a rolling boil. (Normally when cooking grits we use water, but we spice it up a bit when making shrimp & grits by using chicken broth.) Slowly stir in the grits/milk mixture. Stir continuously and thoroughly until grits are well mixed. Return to a boil, cover with a lid, lower the temperature, and cook for approximately 30 minutes, stirring occasionally. Periodically check the consistency of the grits and add water or milk as necessary. (Be careful, like oatmeal, bubbles might burst out and splatter you with wicked-hot starchy grain.) After 30 minutes of cooking, add the butter and stir well to let it melt. And finally, mix in the heavy cream and sugar. Add salt and pepper to your taste.

Shrimp & Sauce
Sprinkle shrimp lightly with Old Bay seasoning to your liking, and set aside. In a sauce pan, cook bacon until crisp. Add diced vegetables and saute until onions are translucent. Add shrimp and saute for 30-45 seconds, or until pink. Remove from the pan and set aside. Deglaze the pan with a little white wine. Slowly add the cream and let reduce until thickened. Season with salt and pepper to your taste. Divide grits amont 2 serving plates. Line plate edges with shrimp (10 shrimp per serving). Pour sauce over grits. Garnish with green onion tops.

Shrimp & Grits is always a favorite in my family, so when we prepare this wonderful dish for the masses we cook a lot of grits and pounds of shrimp! Instead of making everyone a plate, we combine the grits, shrimp, and sauce in a large pot and serve with homemade “Baked Honey  Cornbread”…a recipe for another time.