Why the Carolinas rule the Barbecue battle and where you can go to sink your teeth into the action. Southern Recipe included!

By Fanny Slater as published in the 2016 Fall issue.

In the Carolinas, barbecue is a noun. You don’t “barbecue a steak,” and the word is not synonymous for a grill. In the land of pulled pork, barbecue is slow-cooked, expertly-smoked meat smothered in a specific style of sauce. Just as with most foods, the techniques and ingredients vary from place to place. But today, we’re not road tripping all over the map to see how Texas smolders it differently than Kansas City. It’s Cackalack or bust.

There’s a great line in Father of Bride where Steve Martin suggests that his daughter have an inexpensive wedding reception at the family’s favorite restaurant: The Steak Pit. Cheekily, the son responds, “I don’t think you want the word pit on a wedding invitation, George.” Clearly, the fictitious Banks family never visited Raleigh, NC. The Pit—a nationally-acclaimed authentic barbecue destination (with a second location in Durham)—is run by smokemaster Ed Mitchell. While other barbecue spots dotting the area all bear the same rustic, country feel, The Pit is branded by its expansive sports bar-like atmosphere and modernized menu items like Soul Rolls with chopped pork, candied carrots, and pepper jelly. Oh, and free-range, pit-smoked whole hog. This tedious hobby, more expensive and time-consuming than lighting up gas or electric flames, happens to be a dying art. So folks like Ed, who still sling wood-cooked ‘cue, paint a perfectly delicious picture of the past.

Traveling east towards North Carolina’s farmland, you’ll find a restaurant at the other end of the decorative spectrum. Grady’s, a husband and wife eatery brought to life in 1986, prides themselves on the modesty of their cozy establishment. The traditional cuisine and scratchmade sides, however, are anything but plain. Known for being worth every mile of the drive, Grady’s boasts intensely flavored, oak-perfumed chopped pork doused in that good old fashioned vinegar-based sauce. Loyal followers claim that it’s simple, authentic barbecue at its finest (to say the least). Grady’s is so well-respected that it holds a spot on the North Carolina Barbecue Society’s Historic Barbecue Trail

Before we go any further, let’s get down to the basics.

There are essentially two categories of North Carolina barbecue. First, you have Eastern style (whole hog like Pitmaster Ed fires up) where the meat is coupled with a thin peppery sauce and creamy slaw. Then there’s Piedmont, where slow-simmered pork shoulder is slathered in a ketchup-vinegar mixture called “dip” and served alongside red slaw.

Another longtime leader of the Eastern approach is the Skylight Inn in Ayden, NC, whose establishment earned a James Beard American Classics award. The Jones family has been rocking whole hogs since 1947, and the final product—locally sourced, I might add—is seasoned with Texas Pete hot sauce, cider vinegar, and crunchy bits of pork skin. Throw in a scoop of sweet slaw and a cornbread square, and you’ve got a meal that’s been making mouths smile for decades.

Another common spot among smoke fanatics and tourists from all over is Lexington Barbecue. Owner Wayne Monk’s homey shop, located in Lexington, NC, is practically a historical landmark, as it’s been drawing crowds for over half a century. Recognized for their lovingly-prepared Piedmont style pork shoulders and buttery hushpuppies, this family-owned restaurant is deep rooted in tradition and doesn’t plan on changing a thing.

Thanks to a hefty nod from Southern Living Magazine, Goldsboro-based Wilber’s holds the title of best barbecue in the Coastal Plain. Despite the lofty price tag pit-cooking requires, Wilber Shirley still proudly puts in the money, the time, and the effort to uphold this worthwhile tradition. Smack dab in the middle of congested U.S. Highway 70, Wilber’s is
always ready to serve up an abundance of juicy pork to their faithful followers, as well as those who just happened in on a pit stop.

Can’t seem to make up your mind in the Eastern vs. Piedmont great debate? Get the best of both worlds (and a little Tarheel love) at Allen & Son Barbeque in Chapel Hill, NC, where Lexington-style shoulders meet hickory coals and fluffy hushpuppies. So where’s the Eastern? It’s all in the creamy white slaw and zesty vinegar sauce.

Despite being a modestly sized state, South Carolina is bursting with its own unique patterns of barbecue. As opposed to the North Carolina varietals—which differ by the cut of meat and what you put on it—South Carolina is known for being saucy. In this birthplace of barbecue, you’re bound to find that tangy vinegar-pepper mixture from end to end of the Palmetto state. There’s also a light tomato-based “dip,” a heavier sauce, and something in its very own class—mustard-style. With hundreds of restaurants to choose from, it’s not hard to accidentally bump into a pulled pork sandwich. But here are the places to hit on purpose.

Scott’s tops the charts, and like I said, it’s all in the sauce. Righteous boiled peanuts don’t hurt either. Visited by famous names such as food television personality Andrew Zimmern, Scott’s is legendary for basting their butterflied pigs with a vinegar-pepper-sauce-tangled mop. Once the hog is ready for pulling, Mrs. Scott rolls up her sleeves and gets to work. Covered in crispy skin pieces and another addictive sauce (this one’s a secret), a plate of this sensational barbecue is renowned from coast to coast.

If you’ve got Charleston on your edible itinerary, there are plenty of pork-tastic landmarks to choose from. How about somewhere that will literally rock your world? Fiery Ron’s Home Team BBQ on Sullivan’s Island (one of several offerings from Pitmaster Aaron Siegel) is celebrated for their bold ‘cue, generous portions, and Southern sides. Oh, and did I mention they were voted Most Life-Changing Ribs by Esquire fans? Home Team’s Sullivan’s Island location offers a more expansive menu than its original predecessor, dishing out novel eats like barbecue shrimp and smoked turkey. Craving tender, melt-in-your-mouth brisket? You’ve come to the right place.

Head to Gilbert for a Midlands gem who loads up the barbecue for lunch and brings out the buffet for dinner (and the post-church feast on Sunday). Price’s Bar-b-que is one of the best kept secrets in South Carolina, and if you grew up on this country cuisine, it’ll whisk you straight back to childhood. In addition to putting out epic plates of nostalgia, Price’s banks on the fact that old fashioned methods are what their audience craves. Their mustard-based Lexington-style sauce is just one of the many ingredients that make up the recipe for this dynamically delicious restaurant. There’s also the homemade slaw, cream pound cake, and a meaty hash. One more irresistible factor? Exclusivity. Price’s doors are only open Thursday to Sunday.

For another all-you-can-eat-adventure, swing into the Georgetown area and pull up a chair at Big Bill’s Low Country Bar-B-Que. Got a picky eater who wants to pick their own meat? Bill’s puts a whole shoulder on the buffet line so patrons can go for everything from the juicy shreds to the charred bark. For an extra flavor zing, dunk your pork through the lightly spiced pepper and vinegar sauce or the version with extra heat. Some unique Lowcountry sideline suspects also stand out (like the Shrimp Pileau and dirty rice). If you can manage saving room for dessert, the banana pudding is top-notch, and visitors consider the Italian cream cake an invincible treat. 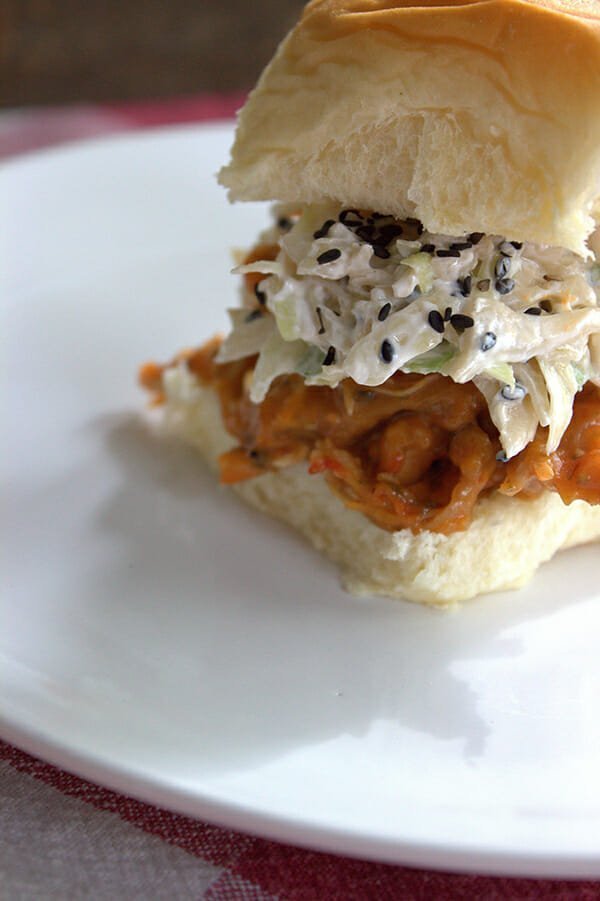 In a small bowl, whisk together the mayonnaise, sour cream, apple cider vinegar, and sugar. Season to taste with salt and pepper. Several tablespoons at a time, pour the dressing over the cabbage until it’s saturated to your liking. Toss well to combine the flavors. Just before serving, fold in the sesame seeds.

In a large bowl, combine the brown sugar, paprika, garlic powder, salt, and pepper. Drizzle in the olive oil, several tablespoons at a time, until it’s the consistency of a paste. Rub the mixture all over the pork shoulder, cover with plastic wrap, and marinate for at least four hours, or at best—overnight.

Meanwhile, prepare the barbecue “dip” and slaw and preheat the oven to 325°F.

Place the marinated pork shoulder into a baking dish and cook until it reaches an internal temperature of 190°F, about three to four hours. Allow the meat to rest, and then shred with two forks. Toss the pulled pork with the barbecue “dip.”

Assemble the sandwiches: Top each roll bottom with a heaping scoop of shredded pork, a scoop of slaw, and the top bun.

In a medium sauce pan over moderately high heat, add all of the ingredients, whisk to combine, and bring the mixture to a boil. Reduce the heat to low and simmer, whisking occasionally for 20 minutes. If the sauce is too thick, thin it out with several tablespoons of hot water. Refrigerate until ready to use.