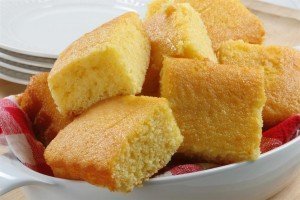 No recipe collection of any southern cook would be complete without a recipe for cornbread. Cornbread has been around for as long as its main ingredient, and Native Americans learned early in their history how to dry corn and then grind it into meal. The next logical step was to add water and salt, and then cook the batter. The result was a simple prototype for what we today recognize as cornbread. Later, eggs and baking powder were added by early Americans, and milk replaced the water, changing the taste and texture of the final product.

All over the globe, a variation of cornbread can be found wherever corn is grown. Here, the first cornbread was made by Native Americans, who taught the first Europeans to arrive in the New World how to grow corn and how to make it into bread. Because different varieties of corn were grown in the U.S. according to region, the resultant cornbread differed, as well. Yellow corn was grown in the north, white corn in the south, and blue corn in the southwest. But the type of corn used to make cornbread was not the only distinction. Later, different ingredients were added, again, according to region. Early Americans in the north gradually came to add honey or other sweeteners to the dough, while southerners preferred bacon fat or lard. In Mexico and the southwest, green chilies and red peppers were added. Because it is a nutritious, inexpensive meal, cornbread gained popularity during the Civil War, and has become a southern staple since then. Many southern families continue to serve cornbread with every meal, and a popular southern breakfast or snack is cornbread with milk, which is prepared by crumbling the cornbread into a bowl or glass, and then pouring milk over it. The following recipe is a more healthy variation of a traditional southern cornbread:

Note: You can vary this recipe according to your preferences, adding crumbled bacon or onion bits, or substituting the milk for buttermilk. Also, the bread can be made up to 3 hours in advance. Just wrap it in foil and reheat in a warm oven. Then, serve and enjoy!

Search for Gated By State: