A History of Landfall 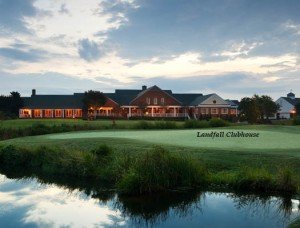 The community of Landfall is located in the beautiful and historic city of Wilmington, NC. The city was settled in the 1720s along the Cape Fear River, and has a long and eventful history. You can see bits and pieces of it throughout the city, in the remnants of cobblestone streets and old buildings along the riverfront. And that’s just it: the places in Wilmington have their own unique stories to tell. Landfall is one of them.

Landfall is the Port City’s oldest gated community, getting its start as a community in the 1980s. But before it became home to many happy residents, and before it was even called Landfall, this particular piece of land was something different. It was originally known as Pembroke Jones Park, named for millionaire and then-owner Pembroke Jones, a successful rice broker and railroad investor. At first, Jones used the land as a hunting preserve. In 1909, Jones built a large mansion on the property (where Airlie Gardens is now), and it became known as the “Lodge”. As Jones and his wife, Sadie, became a popular and prominent couple in society, Jones would host parties in the Lodge, while Sadie would entertain in the bungalow in Airlie.

Unfortunately, the Lodge (sitting abandoned at the time) was destroyed in a fire in 1955, but today there are still a few relics of the complex remaining. The “Temple of Love”, a stone gazebo, is one of them, and is now the center of the restored garden.

The idea to turn the property into Landfall was brought to life in the 1970s, thanks to Anthony B. Akers, founder of the Landfall Development Co. Akers married Jones’ granddaughter Jane Pope, who had inherited Pembroke Park. However, due to the unexpected death of Akers, plans for Landfall were put to a halt. It was several years later that the plans were revisited by Landfall Associates, and in 1984 the project was approved by New Hanover County. Construction was underway in 1986, and by 1989 the community was pleased to open their first clubhouse. 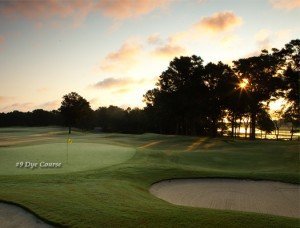 Landfall sits on 2,200 acres along the Intracoastal Waterway, and offers around 1,570 homes within 24 unique sub-communities. An appealing feature of the community is the 4 miles of waterfront properties. It also offers one of the only private, member-owned equity clubs on the North Carolina coast. With 2 golf courses complete with 45 championship holes and designed by golf sensations Pete Dye and Jack Nicklaus, the golf game here is on par. And with Forbes Magazine’s 2001 ranking of “Best Places”, the community was named “Best Address”. Other icons of Landfall are the Kenan Chapel, an inter-faith chapel located within the community. It’s frequently used for all kinds of gatherings, including weddings, memorial services and concerts.

Imagine calling a place like Landfall home, where you can spend your days relaxing on the sun-warmed sand of Wrightsville Beach. Where you can stroll along the riverwalk downtown, and peruse shops, grab a bite, and be a part of the other cultural offerings. Where you can enjoy the community’s 2 clubhouses, located on each of the golf courses, and play a game of tennis in the top notch sports complex. Where you can make lasting memories, and become a part of Landfall’s story.