Wilmington, NC’s Fanny Slater made it to the big time when she won Rachael Ray’s Great American Cookbook competition last May with her “Tastes Like Childhood” theme. 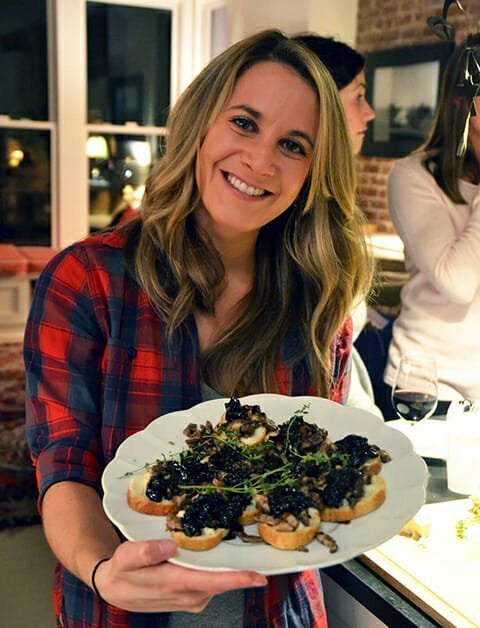 Out of 1,000 entries from around the nation, months later, Fanny’s demonstration video and recipes landed her in the top five. Then her “Tin Foil Surprise” of egg, orange-lavender fig jam, Havarti cheese and fresh green arugula took home the coveted grand prize (her sparkling personality did not hurt). Fanny’s cookbook will be available in 2016.

While Fanny now travels between Wilmington and New York, she writes a food blog, fanfarefoodie.wordpress.com, conducts cooking demos and classes, and caters events. She has also begun work on a television pilot. After her last trip to New York City, Fanny sat down with Ideal-LIVING to give a few cooking tips and share one of her recipes.

Of your cooking classes, demonstrations or catering, what is your favorite?

Well, it’s hard to say. I love them all. I just love to create. I enjoy the catering, as I can just spend my time cooking and dropping off the food, but then I don’t get the personal interaction. Cooking classes can be a lot of fun—it’s interactive and I can interweave my stories in with the food preparation. It’s great to get a group of people together who enjoy good food and entertainment. Often the groups will bring their own wine to pair with the food selections. But, I must say the cooking demos are my favorite–both the food and the stories get equal billing. To me it’s like bringing the Food Network into people’s homes. It’s interactive, entertaining and fun! It’s not just about the food—I love to share the stories of the food. I like for food to create a memory and that’s what I’m able to do with both the classes and the demos.

I like to shop at local farmer’s markets. It may seem silly, but North Carolina has a lot of great heirloom tomatoes. With spring in the air, my favorite ingredient is spring onions. They look like scallions, but with huge bulbs. I just cut off the bulbs, slice them in half, cut them into thin strips and roast them in the oven at 400° for about 25 to 30 minutes. The roasting caramelizes them, resulting in a very sweet taste to serve as a side dish. It’s so easy.

What is the most underrated ingredient?

It would have to be FRESH HERBS. I find that the average person does not cook with fresh herbs—people seem to think it’s easier to use dried herbs. My refrigerator is stocked with fresh herbs from sage to tarragon to ginger. You can use them in anything. Sprinkle some fresh oregano or parsley over your pasta—it can be that easy. One tip—basil hates the cold. If you purchase living basil in the store with the roots, just put the roots in a glass with a little water and let it sit at room temperature. It can last for weeks that way.

Do you have any tips for cooking for two people?

One of my staples at home is pan-seared chicken thighs. One package of six serves two to three people. You can sear the chicken in an oven-ready pan, then using the same pan, add some potatoes, shallots and wine, then roast in the oven. You can’t overcook the chicken. The best part is you only have a cutting board and one pan to clean. 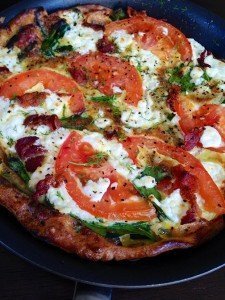 Position an oven rack about 6 inches from the heat and pre-heat to low broil.

In a medium skillet, sauté the bacon over medium heat until crisp, 8 to 10 minutes. Remove the bacon with a slotted spoon and set aside on a paper towel. Pour out some of the bacon fat (so you’re left with about 2 tablespoons), and add the spring onions to the pan. Season with salt and pepper and then sauté, stirring occasionally, until the onions are lightly caramelized, 4 to 6 minutes.

In a medium non-stick broiler-proof skillet, heat the butter over medium heat.

In a bowl, whisk the eggs with the half-and-half, dill, 3/4 teaspoon salt, and 1/2 teaspoon pepper. When the butter begins to foam and sizzle, pour the egg mixture into the pan. Evenly drop in the cooked bacon, spring onions, spinach and goat cheese. Using a heatproof spatula, pull up the sides of the egg mixture and tilt the pan so the liquidy uncooked egg on the top goes to the bottom of the pan. Continue doing this until the frittata is mostly cooked through, but still slightly liquidy on top, 1 to 2 minutes. The bottom should be lightly golden brown.

Arrange the tomato slices on top and sprinkle with the red pepper flakes and an additional pinch of salt and pepper. Place the entire pan under the broiler. Cook for 3 to 5 minutes, keeping the oven door slightly open and rotating the pan to get even heat if necessary. Keep a close eye, as the frittata can burn easily under the broiler.

The frittata is done when it’s very fluffy and golden brown on top and no longer runny in the middle. Cut into pie-like pieces and serve.
Previously published in the 2015 Spring Issue.