Just looking at the facts from scientists (www.epa.gov/climatechange), we see that our winters are becoming milder, summers warmer, our growing seasons longer, and greater variability when spring comes, but often coming quite early.  The precipitation trend is toward more in the winter but of wet snow or even mixed events, and more heavy rain events in summer yet with periods of drought.  How is the gardener to cope?  With proper planning and plant choices, gardeners can make their gardens and landscapes better adapted to weather changes, extremes, and the impact of these on pests and diseases. 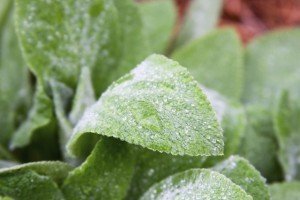 Dealing with Drought.  These tips are particularly important if you have soils that tend to dry out quickly during drought periods (sandy loam) or bake hard (clay loam).
–Cultivate the soil deeply prior to planting, and work in plenty of organic matter.  The latter, such as compost, rotted manure, or peat moss improve soil structure and water retention.
–Apply sufficient and appropriate fertilizer (according to a soil test), but not too much.  Too much leads to excess top growth, more susceptible to drought and plants needing more water, not less.  Adequate fertilizer keeps plants growing well, and thus more tolerant of drought.
–Chose plants with gray-green or silvery leaves.  These tend to reflect light and not dry out as quickly. Lamb’s ears, catmint, lavender (where hardy), Russian sage, Silver Mound and other artemsias are examples with silvery leaves.  Ornamental grasses (for sun) with their spiky leaves, or plants with waxy-coated leaves like some hostas (for shade), also tolerate drought. Plants with
deep tap roots such as false indigo or Baptisia, balloon flower, butterfly weed, poppies, and thistle better withstand drought than those with more shallow, fibrous roots.
–Plant small.  Plants that grow in a dry soil or site from an early age will be more adapted to it.
–Mulch.  Use organic materials such as bark chips or straw, 2 or 3 inches thick, to help conserve water and prevent the soil from crusting.  Around shrubs or trees that don’t spread as do many perennials, permeable weed fabric mulches can be used with a thin layer of bark on top.
–Install irrigation.  Drip or soaker hoses are most conservative of water.  Half or more of the water from overhead sprinklers may be lost to evaporation.
–Water deeply.  Unless for a seedbed just getting started, less frequent but deeper watering (the top foot of soil) will encourage deeper rooting which is more resistant to drought.
–Create ponds or water features to provide water to wildlife during droughts.

Too much water.  These tips are particularly important if you have soils or areas that tend to stay wet and soggy after downpours, or that even may flood periodically.
–Choose tolerant plants for these areas.  While few plants tolerate permanently wet soils (except water and bog plants), Siberian iris, joe pye, turtlehead, foxglove,  ligularia (shade) and astilbe (shade) are some perennials for wet soils, the latter two preferring not to dry out.  River birch, hackberry, green ash, swamp white oak, pin oak, willow, and bald cypress are some trees for wet soils.  Red chokeberry, summersweet clethra, shrub dogwood, winterberry, and purpleosier willow are some shrubs for wet soils.
–Use raised beds to grow above the wet soil, the longer the soils stays wet the higher the bed (one foot or more).  Grow shrubs or trees on slight mounds.
–Incorporate drain pipes or tiles to help remove water from areas if they are the only choices for planting, and there is somewhere to redirect excess water.
–Reduce stormwater runoff from paved surfaces by using permeable pavers, just space between solid pavers, or permeable “paving gravel” and bark mulch for lower traffic areas.
–Create rain gardens to hold water from heavy rain events, allowing it to percolate back into the soil over time.  Larger and longer areas, called vegetated swales, help treat and reduce water flow as it passes through these areas.
–Use rain barrels or similar holding tanks to collect water during heavy rains to use later. Many prefer not to use such runoff from roofs on edible crops.
–Consider installing green roofs on sheds or garages to slow and reduce runoff.
–Avoid working on soils while wet, as this will destroy soil structure.
–Avoid removing too much vegetation from slopes, to avoid erosion during heavy rains.
–After a flood, once the soil is somewhat dry, remove it from beds and around plants, wearing gloves if pollutants from elsewhere may have been brought in.  Watch for signs of nutrient deficiency, fertilizing as appropriate or using foliar feeding (watering fertilizer on leaves).  For edible plants, destroy greens, those eaten raw, and any others near to harvest.  Wait until next season to grow crops on that site that are to be cooked.  Wait two seasons to grow salad crops or those to be eaten raw, in order to allow potential diseases to leave the soil. 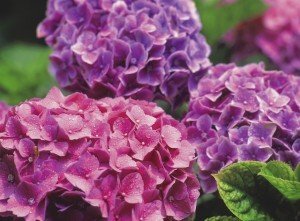 Coping with Cold.  Even if some winters are warmer, there may be cold spells with little or no snow cover, causing soil temperatures to drop.  While, on average, winters may show a warming trend, some may drop lower than normal.  Extremes may be the new norm. Wide temperature swings, particularly in fall and spring when plants aren’t fully hardened, may cause damage.  Choosing plants adapted over a range of wide climate zones is a starting point.
–Mulch.  Only a couple inches of mulch can trap ground heat, keeping roots warmer and preventing rapid temperature swings in soil temperature (the key for perennials).
–Keep woody plants, particularly broad-leaf evergreens such as rhododendrons, well-watered prior to winter.  This will help them survive drought and long winters, and drying winds.
–Tender plants, such as roses, can be mounded with straw (if not rodent issues), or otherwise with compost, soil or even manure, to protect bases and graft unions.
–Use protected microclimates on a property for more tender plants such as some magnolias, butterfly bush, less hardy rose varieties, and some hydrangeas.
–Even if the climate is warmer overall by a hardiness zone or more, there can still be extremes some winters.  Or, while a particular winter may be warmer on average, it could still have extreme cold episodes, killing more sensitive plants and buds.  Continuing to plant the most hardy varieties will provide some protection again such extremes, as well as abnormal late frosts.
–If a shrub is special, or with stems prone to breaking under ice, protect it with a wooden structure or teepee, or even wrapped in burlap (not plastic that gets too hot on sunny days).

Potential pests.  While human activity is a main factor helping to introduce exotic and invasive and destructive pests, the climate is a key factor in helping them to establish.  Climate affects the breeding season, length and number of life cycles, foraging times, food availability and availability of predators such as birds, and of course overwintering.  Get in the habit of at least weekly scouting your plants for new pests.  Then learn what they are (check the internet, local trained garden professionals, or your state Extension system). Decide the level of tolerance and, if controls are needed, start with least toxic and non-chemical ones if available.

Dealing with disease.  Drier summers would mean less diseases that like water, such as downy mildew, leaf blights such as tomato and potato, rose black spot, and fruit scabs.  Powdery mildew, however, does just fine in drought and likes drought-stressed plants.  Warmer and wetter winters, however, could lead to more potato leaf blight and root rots.  New diseases to the North from southern climates might establish if winters are warmer.  Make sure to buy disease-free plants, and disease-resistant cultivars if available.