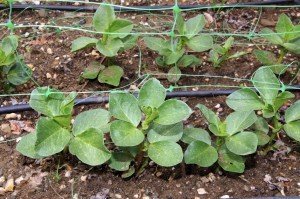 A cover crop is just that– a crop sown to cover a fallow garden area.  There are several choices for cover crops, depending on the purpose which includes enriching the soil or controlling weeds.

While growing, cover crops can slow soil erosion, outcompete weeds, provide cover over the ground so no light reaches it and so no weed seeds germinate, and to help air and water permeate the soil.  By reducing soil compaction, they increase water infiltration.  This in turns reduces run-off of nutrients into waterways. Cover crops increase the diversity of plant species, helping beneficial insects and soil microorganisms. Cover crops planted at the end of the season like annual rye, right after vegetables are harvested, help scavenge and hold onto any remaining nutrients so they aren’t rinsed away by rain before the following season.

Cover crops are easy to establish.  Just remove harvested food crops or other growth, weeds, and stones from an area, then rake smooth.  Broadcast seeds evenly over the area, at the rates given for each crop.  Then rake seeds in and water with a fine nozzle setting on the hose. Keep watered daily until seeds begin germination. Sow fall cover crops, to leave over winter, in early fall so they have at least four weeks to get established before the first heavy frost.

Tilling cover crops into the soil at the end of the season, or after winter, adds to beneficial soil organic matter and returns nutrients back to the soil. If not a large area, you may prefer to work them into the soil with a shovel or garden fork to cause less damage to soil structure.  You’ll want to stop perennial crops in spring by tilling into the soil, or they may grow for many years.  Annual crops are winter killed, or you can cut back after flowering while they are still growing and green (often called a “green manure” crop).

Since some cover crops may reseed, particularly buckwheat, cut them back right after flowering, before seeds form.  References may say to cut back prior to flowering, however many beneficial insects feed on the pollen of cover crops.

Cover crops can generally be grouped into legumes (pea family), grasses (including grain crops), other non-legumes, and mixtures. Legume crops such as clovers, hairy vetch, and Fava beans add extra nitrogen to the soil. They have special bacteria on their roots that take nitrogen from the air, and convert or “fix” it to a nitrate form that plants can then use. Tilling them into the soil adds this nitrogen for your subsequent vegetables crops.

Since legumes are perennial, you’ll need to till them down to stop growth.  Most are slow to establish, so aren’t good at controlling weeds.  If you want this, you’ll need to mix and sow with another “nurse” crop such as oats or other grass.

Red, crimson, and berseem clovers are summer cover crops to control weeds and, being legumes, add some nitrogen to the soil.  Sow either in spring or early fall, with 2 to 3 pounds per 1000 square feet.  You can then till into the soil in late fall while still green (a “green manure” crop), or leave over winter and till in the next spring.  Mowing first, before tilling, is easiest.

Another legume crop that adds nitrogen to the soil, plus is drought tolerant with attractive purplish blue flowers, is hairy vetch.  Sow in spring or fall with 2 to 4 pounds per 1000 square feet.  Till into the soil in fall if sown the previous spring, or leave overwinter and till in the following spring.

Fava bean has large seeds and is a bit more expensive used as a cover crop, but can be grown first as a food crop for its beans, or for its attractive flowers, then tilled in or allowed to winter kill.  It is one of the best legumes for fixing nitrogen. Sow in spring in the north, or late summer, as it likes cooler temperatures.  Use about 5 to 6 pounds per 1000 square feet.

Alfalfa is a long-term legume crop used to add nitrogen to the soil, plus to provide ground cover and control erosion.  Sow with 2 to 3 pounds per 1000 square feet in fall or spring, and leave for two years before tilling into the soil.

Grasses include annual and perennial choices, and although they don’t contribute much nitrogen back to the soil they are good for controlling weeds and erosion.  One of the best, for either spring or fall, and the one many consider first is annual rye. A quick-growing annual crop, annual rye is good at controlling weeds.  Sow in spring, or even the fall prior, with 2 to 3 pounds per 1000 square feet.  Then till into the soil in fall if spring sown, or the following spring if fall sown.

Oats are used as a green manure crop to control weeds, or as a winter cover crop to control erosion. It is perhaps the most common fall sown cover crop. Depending on desired use, sow in spring and till in just after bloom for the former.  For the latter use, sow in late summer or early fall and till in the following spring.  Since it is winter killed, you can till in early and then sow spring crops such as greens or radishes. Use 4 to 5 pounds per 1000 square feet when sowing.  For small gardens, use 4 ounces per 100 square feet.

Combine oats or rye with hairy vetch for the benefits of both.  Sow 5 pounds of this mix per 1000 square feet in spring or early summer, then till in during fall.  You may sow such crops in fall, then till in the following spring or plant directly in the residue without tilling. Other grass crops you may find are wheat and triticale (a wheat and rye hybrid).

If you want a winter cover crop, but are like me and don’t get around to sowing one in late summer, consider winter rye.  Growing at cold temperatures down to below 40 degrees (F), it can be seeded later than other cover crops into early fall, with 4 to 5 pounds per 1000 square feet.  Then till in the following spring, and follow with warm season vegetables like tomatoes, peppers or squash.  Like the hairy vetch, this one also is drought tolerant.

The main non-legume cover crop that isn’t a grass, and is the main one used during the summer, is the annual buckwheat.  Sow it in early summer, with 2 to 3 pounds per 1000 square feet.  It grows rapidly, especially in heat, reaching 2 or 3 feet high. Although buckwheat doesn’t contribute much nitrogen or organic matter to soils, it is used to control weeds and erosion.

If you have the space, it is best to rotate your garden to a different area every year or two.  This gives the previous beds a rest, and allows you to leave them for a season with a cover crop.  If this isn’t an option, sow a cover crop in summer after spring crops are harvested, or in fall right after summer crops are removed. This will help replenish soil structure and fertility, keeping weeds under control, and result in better gardens back there the following year.