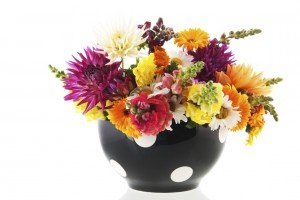 If you haven’t ever entered flowers in the fair, or even considered doing so, you should.  It is easy, you often have a good chance at some ribbons and perhaps even monetary awards, and you will be adding to the beauty for all to see.

Most underestimate the quality of their flowers.  By following a few simple steps you’ll be able to pick the best quality flowers, and have them last as long as possible (often referred to as a long “vase life”).  These steps can also help even if just cutting flowers to enjoy in your own home or to give as gifts to neighbors.

First you should call your local county, regional, or state fair, and obtain a copy of the “premium” guide.  This lists all the directions on flower categories and their details, when to enter, premiums awarded to winners, and more.  Be sure and follow directions to avoid disqualification.  If the category calls for three stems, make sure you have three stems, not four, not one stem with three branches.

If making an arrangement, make sure you follow rules for the theme or style.  This might include number of different types of flowers.  Or it might include height and width.  If making a dried arrangement, make sure you use fresh dried flowers.  Use ones you collected and dried this year, not ones that have been collecting dust for several years.  Of course most fairs require flowers in arrangements to have been grown in your garden, not purchased from a florist.

When you go to the garden to start looking, take a pail with water.  I like to use a large five gallon bucket to keep flowers with long stems upright.  I also put some flower preservative in the water there, as well as in the final vases or containers.  You can buy this, usually as a powder, at florist shops.  It has all the ingredients flowers need to stay fresh.

You also should make sure the pail or bucket, and all containers and vases, are clean.  Otherwise microscopic bacteria may start growing, clogging the water vessels in flower stems, and resulting in them wilting prematurely.  After scrubbing containers clean, you should use one part bleach to nine parts water to further kill such bacteria.  Make sure you rinse the containers well with clean water afterwards.

Armed with your rules or flower list, your clean pail and water, and sharp scissors or pruners, you’re ready to cut flowers.  Pick your flowers the day of the fair, preferably in the morning when the stems are filled with water. If you pick flowers in the heat of the day, they already may be partially wilted.

Select only top quality blooms for your arrangements. Cut at a slant near the bottom of the stem, using a sharp knife or bypass pruners.  Scissors work fine if thin stems. The anvil-type pruners tend to crush the stems.

Look for those just beginning to open– they’ll last the longest in vases.  For roses that open rapidly, you should cut them when the buds are just about to unfurl.  For gladiolus, cut them when only a few lower flowers are beginning to open. Florists are no longer recommending that you crush the stems of woody plants, a practice floral arrangers–and fair exhibitors–have followed in the past.

Look for freedom from spots on flowers and leaves.  These could indicate pest damage, disease, or poor culture such as lack of water and sunscald.  Of course don’t pick flowers with excessive holes or chewed leaves. Look under leaves as well for signs of disease or even lurking pests.  Having live pests on entries is a sure way they’ll quickly be thrown out!

If only a few damaged leaves, you can merely cut them off.  But enter a stem totally devoid of leaves, and the judges might wonder what was wrong with the leaves!  Speaking of leaves, make sure none are on the lower stems and in the water of vases or containers.  They will rot and cause organisms to spoil the water.

When removing leaves before placing in containers, also recut an inch or so off the stems.  This exposes newly opened water vessels in stems which are better able to absorb water. Stems take up slightly warmed water more easily and quickly than cold water. For longest vase-life, keep flowers as cool as possible, out of drafts, and out of direct sun.  This keeps them from drying out as quickly.

For themed categories, such as a holiday arrangement or formal table centerpiece, be creative. In these classes, the container and idea play into the judges’ decision as much as the quality, choice, and arrangement of the flowers.

To transport flowers safely to the fair, dump some of the water out of each vase into a larger container to avoid spillage. Bring this water with you to top off the vases when you arrive at the fair. Pack arrangements upright in a sturdy cardboard box, using wadded newspaper, towels or similar to keep them separate. Do not let wind from open car windows blow directly on the flowers. Take extra blooms in case stems are broken or crushed during travel.

Give yourself plenty of time to get to the fair before the deadline for entering closes. Be sure to fill out each entry card completely. Follow these simple steps for choosing and harvesting flowers, and enter some of your more unusual or showy flowers, and you may just take some ribbons home from the fair.