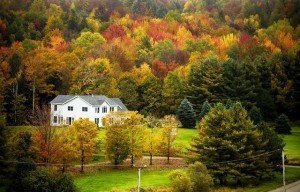 Various parts of the country are known for their vibrant displays of fall foliage colors, none more so that New England and, in particular, Vermont.  It seems odd that we get such joy from the annual death of leaves from “deciduous” trees (those that lost their leaves in fall).  Why leaves change colors in fall, with some years more brilliant and long-lasting than others, is based on some simple science and environmental cues.

Fall leaf colors are due to plant pigments in leaves.  The colored pigments are the same that produce colors in flowers and fruits. “Chlorophyll” is the pigment responsible for the green color in leaves, and for producing carbohydrates (sugars) plants need for growth.  It does this through the process of “photosynthesis”, producing sugars and oxygen from carbon dioxide and water.  Chlorophyll does this through using certain wavelengths of light—primarily blue and red.  It is continually being produced and replaced during the growing season.

“Carotenoids” are leaf pigments responsible for yellow and orange colors in leaves, particularly in fall.  Think of orange, as in carrots. They are present during the season but masked by the green chlorophyll, except in plants that may be stressed or with yellow leaves normally.  One type of these carotenoids is “xanthophyll”, coming from the Greek “xantho” for yellow.  Carotenoids are responsible for absorbing wavelengths of light that chlorophyll doesn’t—mainly blue-green and green, as well as using excess energy produced in leaves as in high light conditions.  In fall, with no chlorophyll around, they may act as a sunscreen. They’ve been around in plants a while, perhaps 3 billion years.  Some trees with mainly yellow, or yellow and orange, fall leaves include sugar maples, hickories, beeches, birches, and tulip poplars.

“Anthocyanins” are the pigments responsible for red and purple fall leaf colors.  These are only produced in the fall when sugars are trapped in the leaves.  They function similar to the carotenoids, and help the leaf use up any remaining energy as chlorophyll disappears.  Abundant dry weather and sunlight lead to more sugars in leaves, which in turn leads to brighter fall reds. More red in leaves, and earlier reds, can come about too from plant stresses, low nutrition, and near but not freezing temperatures.  Freezing stops the process of making the red pigments.  Some trees usually with red leaves include scarlet oak, sumac, some sugar maples, red maples, mountain ash, sweet gum, and sourwood.

Why sugars are trapped in fall leaves, and why chlorophyll disappears in them, is due to something called the “abscission layer”.  This is a separation layer of cork-like cells that develops between branches and leaf stems in response to shorter days (in reality it’s the longer nights) and cooler temperatures.  It seals off the flow of nutrients between leaf and stems, and eventually roots, which causes the chlorophyll to not be replaced.  So it disappears during early to mid fall, leaving the yellow and orange pigments to be seen, and red pigments to be produced.

With time, even these colored pigments break down, leaving brown ones called “tannins”. What colors are produced by what plants, and in what amounts, and when in relation to other plants,     is due to the programmed genetics of a particular plant.

Similar environmental cues as those causing red color in leaves also may cause fall colors to come sooner, or later, or to last longer some years than others.  Drought during spring and early summer may signal the plant to form the sealing barriers to leaves earlier, shutting down and turning color sooner than usual.

So while moisture is good earlier in the season, too much later in the season means more clouds, less sun, and more muted colors.  Too much rain in fall, and strong winds, may cause many leaves to fall prematurely.

Cooler temperatures in late summer (as in August 2014), and plenty of sunshine, often leads to brighter colors sooner.  This is particularly true if the sealing layer on leaf stems has started forming.  Cool is good, but too cold (as freezing or below) can be bad, killing leaves early.  So ideal for fall color would be a moist growing season early, dry late summer and early fall, with sunny warm days and cool nights during the latter.

When touring through areas with brilliant fall colors, as you enjoy them, now you should have a better appreciation of what makes this natural yearly art show happen.  Although timing can vary from year to year, due to conditions already noted, generally peak colors occur from late September in northern New England and higher elevations, to late October in southern New England.

When thinking about plants with fall colors for your own landscape, check out other articles on this topic (pss.uvm.edu/ppp/articleS.htm).  Take a virtual foliage tour, and get ideas on colorful landscape plants, at the U.S. National Arboretum website under the Gardens Photo Gallery (www.usna.usda.gov/).