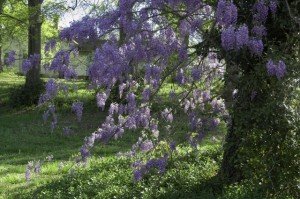 Distinctive new, or underutilized, trees and shrubs suited for New England are given the Cary Award.  There have been five winners over the last couple of years.

Named for a Massachusetts nurseryman, and administered by the Tower Hill Botanic Garden, this award is given to several winners each year as judged by a panel of professionals.  These are either new plant introductions, or others that aren’t new but deserve wider use in landscapes. Generally trees and shrubs are chosen, but in 2014 the three winners were vines.

Clematis ‘Betty Corning’ is one of the winning vines for 2014, and is a cross among two species (C. crispa x C. viticella).  It was chosen for its long blooming through most of the summer, with dainty and small, lightly fragrant bell-shaped lavender flowers with recurved tips.  Elizabeth “Betty” Corning was a plantswoman of note, who found this in a neighbor’s garden in Albany, New York in 1932 and saw that it was introduced to nurseries.

Since this clematis blooms on new wood or growth, a good time to prune and not affect flowering that season would be late winter or early spring. Vines grow 6 to 8 feet high, so need adequate support.  As with most clematis, they like cool roots, so place where the lower quarter or so of the plant will be in the shade. A good feature of this plant is that it is resistant to the clematis wilt disease.  It will grow into zone 4 in the north (-20 to -30 degrees F).

Another winning vine for 2014, and worth considering for your garden, is the hardy Arctic Beauty kiwi (Actinidia kolomikta).  As its name indicates, it is quite hardy to zone 3 (-30 to -40 degrees F), being a native of eastern Russia.  The small, fragrant spring white flowers are hidden among the leaves.  The bark is a beautiful cinnamon color and flaking.  As this vine is vigorous, reaching 10 to 20 feet, give it sturdy support in either sun or part shade.

This vine comes in male and female plants, the former often more colorful with new leaves in spring splattered with cream, pink, and white among the green. Leaves turn to all green later in summer.  ‘Pasha’ is a male cultivar (cultivated variety) of the hardy kiwi, grown for its brilliant foliage and to pollinate female vines for their edible fruit.  ‘September Sun’ is a common female cultivar, yielding 10 or more pounds of fruit per mature plant.  It may take two years for vines to start bearing.  Fruit begin ripening in August, are less than an inch long, and are eaten like grapes.

The third Cary Award vine winner for 2014 is the American wisteria (Wisteria frutescens).  This is a species native to southern states in North America, but which will grow to zone 5 (-10 to -20 degrees F).  The purple and white flower clusters (“racemes”), drooping and to 6-inches long, appear in May and June.  The pea-like individual flowers have a light, sweet fragrance.  Vines grow 10 or more feet a year, reaching up to 30 feet when mature.  Prune this if needed right after flowering.  Two cultivars you may find are ‘Amethyst Falls’ or the white ‘Nivea’.

There were two tree winners of the Cary Award in 2013.  Veitch fir (Abies veitchii) is another quite hardy choice for northern gardens, good into zone 3.  Needles are dark green above, and with a showy white band below.  It grows slowly, reaching 35 to 40 feet high in as many years, and with a pyramidal shape. Eventually, and in its native habitat, it may reach 75 feet tall.  It is native to central and southern Japan, and is named after a famous plant explorer of Japan’s native plants in the 1800’s.  Veitch fir grows in evenly moist soils, in sun or part shade.  The dense growth provides nesting sites and protection for birds.

The other tree winner for 2013 was the threadleaf falsecypress or threadleaf Sawara cypress (Chamaecyparis pisifera ‘Filifera’). This is another introduction from Japan, first grown in this country in 1861.  It is hardy in all but the coldest areas, growing into zone 4.  It’s drooping, stringy branches give it the threadleaf name.  In 10 to 15 years it can form a dense mound 6 to 8 feet high, up to 15 feet when mature, making it more a shrub than tree.  It prefers moist but well-drained soils, in full sun or part shade.  Part shade is best in warmer climates.

This makes a nice accent or specimen plant in landscapes, as does the even more showy golden-yellow cultivar ‘Filifera Aurea’.   The latter may reach up to 20 feet high.  There are a few other similar cultivars of golden falsecypress, such as the compact ‘Golden Mop’ or ‘Lemon Yellow’.  ‘Sungold’ is in between in height, reaching 5 to 6 feet tall.

For more ideas on great trees, shrubs, and vines for New England gardens, visit the past winners at the Cary Award website (www.caryaward.com/index.html).

Distribution of this release is made possible by University of Vermont Extension and New England Grows–a conference providing education for industry professionals and support for Extension’s outreach efforts in ornamental horticulture.