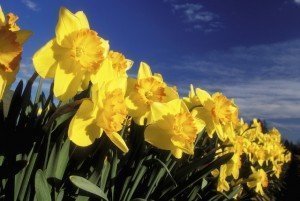 I love spring-flowering bulbs and, of these, daffodils are my favorite.  Daffodils provide welcome and cheerful color after a long winter, require almost no care, are quite hardy, and are avoided by deer and most other mammals. Fall is the time to plant them for bloom next spring.

Daffodils can be grown in almost any garden, as long as it is not too wet.  Even there, they can be grown in better-drained raised beds, or forced overwinter in pots.  While they grow and bloom best in sun, they will tolerate part shade (4 to 6 hours of direct sun daily) from deciduous trees (those that lose their leaves in winter).

Daffodils require some cold in order to bloom, but there are cultivars (cultivated varieties) requiring less cold for warmer climates.  Or gardeners in such climates can “pre-cool” the bulbs prior to planting.  Of course getting sufficient cold is not an issue in the north!

To “force” overwinter in pots, either in warmer climates or just to have some early spring blooms indoors, simply pot bulbs in the fall.  Place three large bulbs in a pot six inches wide, with the bulb tips level with, or just above, the rim of the pot.  Keep moist, but not wet, in the cool (around 40 degrees), such as in an old refrigerator or unheated garage.  Keep there for about 10 to 12 weeks.  Just don’t allow bulbs to freeze.  Remove from the cold after this period, water well as growth starts, and you should see leaves, then blooms in a few weeks.

When planting outdoors in the fall, as with most other spring-blooming bulbs, daffodils need about four to six weeks of warmer soil temperatures to establish roots.  This means the ideal time to plant is late September to mid-October in the north, a bit later in milder climates. If you miss this period though, it is still best to plant bulbs in the fall rather than try to hold them until spring.

Plant with the bulb base about six inches deep below the soil surface.  Daffodils lend themselves to informal plantings, and so individual holes randomly spaced.  These may be made easily with bulb planting tools– metal tubes on a handle.  Place either bulb fertilizer, or a source of phosphorus for root growth (rock phosphate is organic, superphosphate is not) in the holes prior to planting.  Just use a small amount in each hole, perhaps a half teaspoonful, and then some soil so the bulb isn’t resting right on the fertilizer.  Avoid bone meal as it will attract skunks and other mammals which will dig up your bulbs!

Daffodils are a huge group, with about a dozen different classifications, depending on height and type of flowers.  Flowers consist of outer petals (together called the “perianth”), and usually inner ones fused into a tube (called the “corona”).  If the corona is equal to or longer than the petals, it is called a “trumpet.”  If it is shorter, it is called a “cup.”

King Alfred was for years the standard yellow trumpet type.  Others you’ll find more commonly now are Dutch Master, Golden Harvest, and Unsurpassable.  These have the typical golden yellow flowers, compared to the all white flowers of Mount Hood, or the white petals and yellow trumpet of Las Vegas and Bravoure among others.

Double daffodils have double petals, double corona, or both. Golden Ducat (a version of King Alfred) is a gold example. Replete has white petals and orange center.  Ice King has white flowers and yellow center.  Manly is yellow throughout.

Daffodil is the correct common name according to the American Daffodil Society, with the name Narcissus referring to the scientific genus name.  Jonquil correctly refers to one species of daffodil.  Although most daffodils you’ll find are hybrids such as the examples above, there are individual species like the Jonquils that you may also consider.

One  popular species is the Poet’s daffodil — an heirloom species, having a very small yellow cup with red rim, and white petals. The Triandrus species has two or more hanging flowers per stem, with petals pointed backwards (reflexed) such as the white Thalia.  The fragrant flowers of Jonquilla daffodils don’t hang and are clustered, the petals aren’t reflexed, and leaves are cylindrical.  Jonquillas include the dwarf (5 to 6 inches high) Sun Dial or Sun Disc.

If plants have only one flower per stem, with reflexed petals, this is a Cyclamineus type.  They are often dwarf, such as the popular Jetfire with its yellow petals and red-orange corona, or the popular Tete-a-Tete with its golden yellow flowers, or Jack Snipe with white petals and contrasting yellow corona.  Geranium is a popular Tazetta hybrid, with several flowers per stem, each white with red-orange cup.

If you thought daffodils were simply those yellow spring flowers, hopefully now you see the variety among the hundreds of cultivars (cultivated varieties) available.  In fall you’ll find many for sale in garden stores and even some chain stores.  Sign up for catalogs prior to spring for ordering even more variety then, through them or online.

Keep in mind when buying bulbs that they are graded according to size, and priced accordingly.  If all you want is a mix to plant randomly in the landscape, or to “naturalize”, then cheaper bulbs will suffice.  If you want a better show with more and larger flowers, especially of new hybrids, you’ll want to pay more for the larger bulbs.  Consider planting daffodils an investment which will multiply with little, if any, further care for many years.