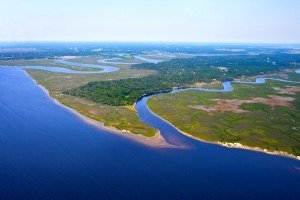 At just over 56 square miles, Cumberland Island is a third larger than Manhattan with an Atlantic shoreline that’s nearly 18 miles long. Originally settled by Mocama Indians about 4,000 years ago, the first Spanish explorers arrived in 1566. James Oglethorpe later claimed the island for England in 1733, and it was renamed in honor of the Duke of Cumberland. General Nathaniel Greene of Revolutionary War fame subsequently purchased much of the island’s southern half. After his death in 1786, his widow remarried, built a tabby mansion with 12 acres of gardens and established a large plantation that produced Sea Island cotton, indigo and rice.

In the 1880s, the steel-baron Carnegie family began buying up land, eventually controlling about 90 percent of the island. A 59-room Scottish castle was built, along with swimming pools, a golf course and the satellite estates of Greyfield and Plum Orchard. Until the stock market crash of 1929, Cumberland was a festive winter retreat for the Carnegies and their wealthy friends. The castle burned in 1959, but its ruins remain.

In 1968, several Carnegie descendants sold 3,000 island acres to Charles Fraser, the developer of Sea Pines on Hilton Head Island, SC. Fraser’s camping trip to Cumberland with environmentalist David Brower and author John McPhee is recounted in the McPhee’s quoted 1971 book. Following an outcry from local
activists and the Sierra Club, Fraser sold the property to the National Park Foundation. 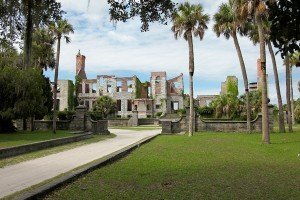 have been spotted on the island, which is home to white-tail deer, wild turkeys and free-roaming horses. Visitors can also tour the Carnegie castle ruins and restored Plum Orchard mansion. The island is accessible
only by boat, and most day-trippers ride the ferry from St. Marys. Rental bikes are available to explore the
island’s unpaved roads, and camping is permitted at several sites with limited facilities.

For more information, go to the websites of the
Cumberland Island Conservancy (CumberlandIsland.com) or the National Park Service (NPS.gov/cuis). 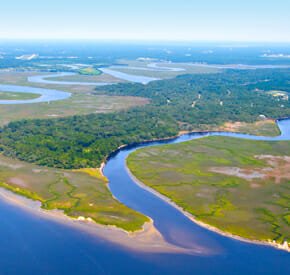 Welcome to the Low-Country! Located on a peninsula bounded by rivers and ocean we are Georgia's Premier Coastal Community. Enjoy world-class amenities with pools, tennis, fitness center, parks and community docks. All protected by manned/gated 24/7 security for peace of mind. Read More...
Your Information Request for your selected properties
Share this with friends!