Daniel Island isn’t an easy place to label. Words like “unique,” “diverse,” and “thriving” are certainly applicable, but they don’t tell the whole story. There’s something more intangible about Daniel Island that makes it special.

Daniel Island is a 4,000-acre South Carolina Lowcountry community that’s actually part of the City of Charleston. But while Charleston has been making history for more t

han 300 years, Daniel Island was primarily rural farmland until about two decades ago. That’s when the Daniel Island Company acquired the land and adopted an ambitious masterplan for the creation of a completely new “island town” at the junction of the Wando and Cooper Rivers.

The first new home was built on Daniel Island in 1996 and today the community has more than 9,000 full-time residents. That impressive rate of growth reflects the variety of home options available: Daniel Island Park comprises the northern half of the community, an upscale residential development that includes the private Daniel Island Club with golf courses by Tom Fazio and Rees Jones. The south side of the island includes seven single-family neighborhoods and their adjoining parks. Interspersed are more than 1,500 townhomes, condominiums and apartments.

“An underlying goal for Daniel Island was to create a true community, a real place,” said Daniel Island Company President Matt Stone. “I remember saying in the early days that if we are doing our jobs right, if we stick to our core beliefs, the community will only improve with age, in appearance and vitality—and it has. We’ve been able to remain true to our original vision because our core development team and ownership have remained intact for the duration of development, which is rare. We’ve also adhered to a conservative financial plan that has allowed us to remain committed to our plans.” 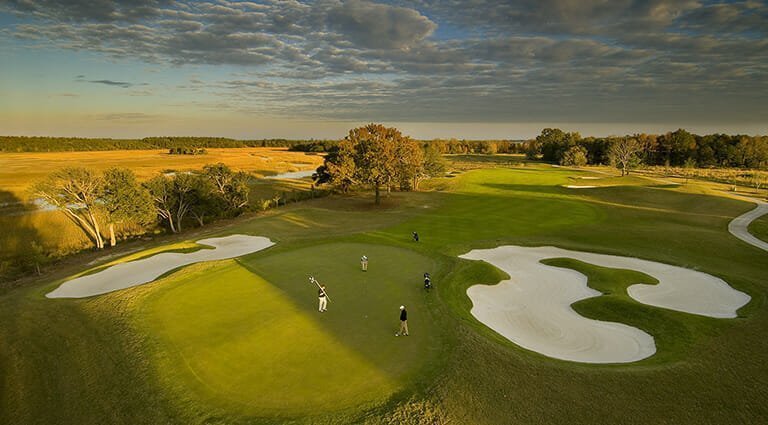 A recent real estate report shows a steady increase since 2011 in both the number of Daniel Island homes sold and their total value. New construction is underway all over the island and the company plans to offer new homesites, townhomes and single-family residences in 2015.

By design, the range of housing choices has attracted a diverse population. While about 20% of Daniel Island’s residents are retirees, the majority are members of working families, plus a growing number of young professionals. For those with children, Daniel Island has three top-performing academic institutions within walking or bike-riding distance from the south-end neighborhoods: the private Daniel Island Academy for pre-schoolers ages 1 to 4, the public Daniel Island School for grades K through 8, and the private Bishop England High School, a Catholic college-prep school that welcomes students of all faiths. 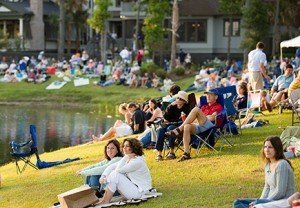 t of the island’s appeal. Downtown Daniel Island started with a Publix grocery and a few shops, but is now a thriving urban center with more than a dozen medical practices and an equal number of banks and financial-service companies. Lawyers, architects, engineers, designers and builders have also set up offices in the town center, which features nearly 20 restaurants and specialty food shops, plus a police, fire and ambulance substation. New loft-style residences and additional retail space are planned.

Daniel Island has also become a major economic engine in the Charleston area. Blackbaud, a leading developer of software for non-profits, and BenefitFocus, a cloud-based human resources management company, have established their corporate headquarters on Daniel Island. Together they employ about 2,000 workers and both are expanding. Many of those employees live on the island and more are moving in because life is pretty sweet when you can bike to your high-tech job. 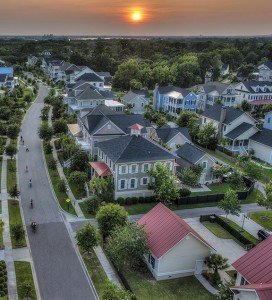 another big contributor to the Daniel Island economy. The National Golf Course Owners’ Association has its main office there and the 5,000-seat Blackbaud Stadium is home to the Charleston Battery pro soccer team and other entertainment events. And then there’s Daniel Island’s signature sports amenity, the Family Circle Tennis Center. A world-class complex with 17 courts and a 10,000-seat stadium for tournaments and outdoor concerts, the center hosts the Family Circle Cup every April, a major stop on the women’s professional tennis tour.

A final note about smart planning: The Mark Clark Expressway bisects Daniel Island adjacent to the downtown area. Residents enjoy 20-minute-or-less interstate access to Charleston’s airport, historic district, beaches and shopping centers, while workers and visitors reach their centrally located destinations within a mile or so of the off-ramp. They only get onto the residential streets when checking out a new place to live.

LIFE IN AN ISLAND TOWN
Tom and Pat Richards moved to Daniel Island in 2006 from upstate New York, where he worked in the oil-and-gas distribution business and she was a school administrator. They were thinking about retirement and saw a magazine article about the “new town” taking shape on Daniel Island.

“This is definitely not a typical retirement community,” Tom said. “There are families with kids everywhere around here and we like that…. We always hoped that retirement for us would be about moving towards something new, as opposed to moving away from something old…. We wanted a clean slate, a chance to reinvent ourselves. And that’s what we’ve found here.” 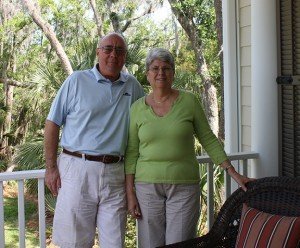 “In fact,” Pat said, “I don’t think we were ever as busy during our working years as we have been since ‘retiring’ to Daniel Island.”

Much of the Richards‘ activity has been through the Rotary Club of Daniel Island, which sponsors a variety of charity fundraisers and support services in the Charleston area. They’re also active in their church, serve as volunteer poll workers and are season ticket holders at the Charleston Symphony and the Wolf Street Theatre.

“And there’s always something fun to do here on the island,” Tom said. “Golf, tennis, fishing, book club or just taking a walk.”

“And someone to do it with,” Pat added. “We’ve made the best friends of our lives here…. Because Daniel Island is so new, everybody is from somewhere else. We were warmly welcomed when we got here, so we try to do the same for our new neighbors….And it’s rare that a group of us gets together and somebody doesn’t say how lucky we are to be here.”

When asked to identify something that Daniel Island lacked, Tom thought for a few seconds and said “Well, we don’t have a hardware store,” then quickly added, “but I think we’ll get one soon.”

There it is: that intangible quality that makes Daniel Island different.

Another telling incident occurred recently at a local zoning board meeting. An island resident wanted to open a Starbucks-style coffee shop with a drive-thru window. His application was denied because the island masterplan forbids food-and-beverage drive-thrus. (Hence, there are no fast-food chain restaurants on Daniel Island.) The disappointed applicant’s reaction? He thanked the board for giving him a fair hearing, acknowledged the concerns of neighbors who opposed his request, and vowed to return with 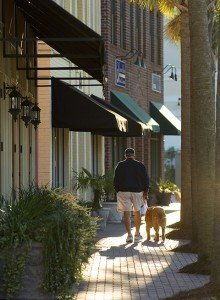 a new plan that eliminates the drive-thru.

There it is again.

Peter and Mary Nemeth have three children and are among those working families that are in the majority on Daniel Island. She’s a program director at Bishop England and he’s a computer consultant who splits time between a home office and his company’s headquarters in Washington, DC. They moved to the island six years ago from the Philadelphia area.

“It was a big change for all of us,” Mary said, “especially moving down South…. I remember some of our friends at the time saying ‘What? Are you crazy?!’”

Moving a family can be a challenge, she said, “but we did our research on the schools and we’ve been very happy with them…. Our kids have a wide range of talents—art, music, our son plays on the school golf team and our younger daughter is a cheerleader. The schools here have a lot of activities that have helped our kids become more well-rounded.”

“And our older daughter just started college this fall in Boston,” she added. “I think that the experience of moving here and making new friends in a new place has definitely helped her to make a smooth transition to college life.

“Daniel Island is an amazing place for families,” Mary continued. “We have our doctor, dentist and orthodontist right here on the island. I go to the community farmer’s market just about every Thursday because we love the fresh foods…. And I’ve gotten into the whole Southern lifestyle; we love to entertain at home and enjoy as many of the local attractions and events as we can.”
Reflecting on their decision to move to Daniel Island, Mary said: “You k 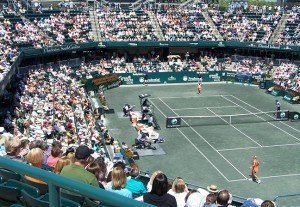 now, Peter and I have family spread out all over the country, but we feel that our neighbors and friends here are part of our family now. We look out for each other and each other’s kids. They can ride their bikes to the park or the pool and we know they’re OK. The police keep an eye on them, too, and we know all of them on a first-name basis…. We couldn’t be more satisfied.”

And those naysayers from Philadelphia? “That’s the funny part,” Mary said. “They come down to visit and after a day or two they say ‘Oh, now we get it!’”

So with your children getting older, have you thought about a place to retire? “We have our retirement community right here,” Mary concluded. “This is our home and our kids’ hometown.Wherever life takes them, we want them to be able to come back here, to reconnect with their friends, to be proud of the place where they grew up

and how it’s gotten even better.”

There it is again, that Daniel Island intangible: A retiree who longs for a hardware store, but is sure one will open soon. A businessman who gets turned down, but promises to return with a new plan. Parents who look forward to the day when their grow-up children will return to their ever-improving hometown.

That’s the special Daniel Island quality: An infectious optimism about everything, a genuine confidence in a future that will include a new hardware store, a new coffee shop (sans drive-thru), and a new phase of life that will be even better than the great one now.

And you can label that a success.