Sign Up For Our Free Retirement Package & Quarterly Magazine

Jump Down To See Communities
In New Jersey

New Jersey Retirement Communities. New Jersey can be thought of as five regions, based on natural geography and population. Northeastern New Jersey, the Gateway Region, lies closest to Manhattan in New York City, and many residents commute into the city to work. Northwestern New Jersey, or the "Skylands", is, compared to the northeast, more wooded, rural, and mountainous. The "Shore", along the Atlantic Coast in the central-east and southeast, has its own natural, residential, and lifestyle characteristics owing to its location by the ocean. The Delaware Valley includes the southwestern counties of the state, which reside within the Philadelphia Metropolitan Area. The fifth region is the Pine Barrens in the interior of the southern part. Covered rather extensively by mixed pine and oak forest, it has a much lower population density than much of the rest of the state.

New Jersey also can be broadly divided into three geographic regions: North Jersey, Central Jersey, and South Jersey. Some New Jersey residents do not consider Central Jersey a region in its own right, but others believe it is a separate geographic and cultural area from the North and South.

Don’t be shy! Request information for as many Delaware vacation and retirement communities as you’d like. There is no limit. 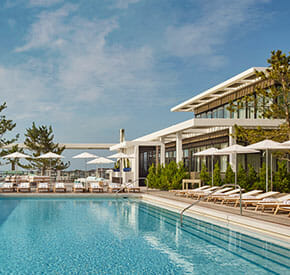